[Re-read] Arya I: Little by little, one travels far 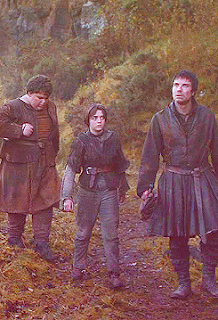 Time for another chapter of A Storm of Swords, that book heralded by so many as the greatest piece of cool fantasy literature ever. But it needed the buildup of the two previous books, and awesome as it is, this is the book that begins to show that the story is - seemingly - getting out of the author's grasp. The cast continues to expand, but I guess no one thought of this as a possible danger because the new characters introduced in this third novel are by and large pretty awesome (I am thinking the Queen of Thorns, the Red Viper) and feel integral to the plot. I've always loved the fact that Martin isn't shy in expanding his cast, the more characters the more real the world feels. Of course there's a limit where the weight of characters perhaps makes it difficult to keep a story flowing. In A Storm of Swords Martin still has the groove, fortunately, as has Arya Stark, now escaped from the ruined awesomeness called Harrenhal, carrying a certain coin, and invoking that sense of adventure I first enjoyed reading of that fellowship crossing the lands of Middle-earth; only here we have three quite different types of characters in quite a different setting. Let's re-read and find out what happens in her first chapter in this epic volume of lore. And maybe speculate about what may or may not appear in the third season of the TV show. Occasionally. Maybe.

All right, took a break to read people's reactions on Valar Morghulis over at winteriscoming, the premier fansite for the TV show. It's interesting to see different opinions and by doing this I have come to the conclusion that I'll be at peace with some of the changes they did from the book. So it's a good thing, really, to allow people to have different opinions which can both help (and of course) hinder further insight. Need I mention at which Ice & Fire-related site you cannot present an opinion without fear of the banhammer? And now let's flip open that book. Or click open that ebook. Reading ebook today. Can't be bothered to go all the way down to the bookshelf. Better to sit outside in the nice early summer sun and read on the phone. Ah, gotta love gadgets.

I love the first line of this chapter, it's so evocative. It sets the mood for (dark) adventure so well: The sky was as black as the walls of Harrenhal behind them, and the rain fell soft and steady, muffling the sound of their horses' hooves and running down their faces. Granted, it's lengthy, but there is so much imagery in this sentence. We learn that the threesome are riding north, away from the lake, following a rutted road. Wolves howl in the distance, which I missed in this week's TV episode. Or was it there? Should definitely have added a wolf howling if not. You know, just to add a bit of tension to the scene. Just before or after meeting up with Jaqen H'ghar.

We're told that Arya stole three horses, a map and a dagger, and that she killed a guard, all this to confirm why Arya is certain she'll be followed. This immediately sets up tension for the reader as we expect Bolton men to come riding around the bend at any moment. Now that I am reading this I wish the TV show had room for Vargo Hoat, Walton Steelshanks et al. And that it was Roose Bolton and not Tywin Lannister who commanded the castle during the season. Oh well. I can see the reasonings behind these changes, absolutely. 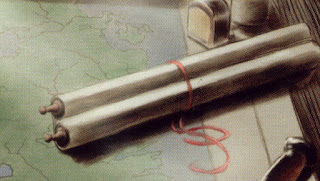 Crossing the first stream, Harrenhal disappears behind them, and Arya leads them off the road to throw off the scent. She's quite resourceful (and thus loveable), isn't she? Oh, and she's ten years old. Always funny these days to be reminded of the characters' ages in the books. Myself I struggle not to see Maisie Williams when reading about Arya, these days. But she's been taught by Syrio Forel, and his words continue to work her mind. Fear cuts deeper than swords. So, ten and skinny she may be, but she's not giving up. The rain stops and starts and stops all day long, like a typical Norwegian summer day, as they travel up and down rolling hills, through bambles and briars, along narrow gullies. In these moments when Martin lovingly describes characters journeying through countryside, the good old specter of mr. Tolkien shows up again, almost unbidden (but welcome). They meet a wolf, but Arya orders her two companions to back off and so they manage to avoid any Imperial entanglements. I mean..
There's a burned village with lots of corpses dangling from apple trees, which sends Hot Pie into a repeated prayer. It's cool how Arya looks at the corpses while touching Jaqen's coin, knowing what "valar morghulis" means. To show how hardened Arya has become at this stage of her arc, she plucks an apple from a tree, even though the tree is full of corpses, and eats it, "worms and all". That's a hard little girl right there. Oh, and how about this one for tolkienesque: "Black turned to grey, and colors crept timidly back into the world." Beautiful. We are reminded that autumn is approaching rapidly (or is already here) when Martin takes time to describe how the trees are beginning to brown. Love these small details. During a breakfast, we leave the long descriptions of the journey to get some direct speech action, to break the lull I guess.

In the conversation as they eat, Arya explains how she knows the way north (more showing of her resourcefulness) and explains that they'll be safe once they get to Riverrun. She unrolls the map to show them, but doesn't dare reveal her secret (her identity) to Hot Pie so she doesn't explain why she knows it will be safe there. Then it's back in the saddle, and back to describing the journey. These small breaks for dialogue are clever (as I guess any writer would agree to) because it gives me as reader the energy to go on with them, even though we're treated to more scenery ("a maze of shallow wooded valleys" does sound nice though). Arya feels they are moving too slowly. In the distance, she sees a pack of wolves. She howls at them, and the leader howls right back at her. Now, I want to believe this is Nymeria and that the direwolf has grown so much since Arya last saw her she doesn't recognize its, ah, voice. Can I say voice? I guess not. Hot Pie begins to complain (he's been quite good so far), but is quickly silenced. More rain, getting colder, pale white mists appear. Unlike Arya, the guys aren't good at riding, which adds to the tension because what if they are caught, you know? Arya knows she could do better without them, but fortunately, although she's turning into a killing machine, she still has compassion and a sense of friendship, so she stays with them. One afternoon they reach a river. Hot Pie whoops, but Arya - characteristically - chews her lip, realizing this isn't the Trident which Hot Pie hopes it to be. They take another look at the stolen map, the rain pattering against the sheepskin. Turns out they are not quite sure where they are, and there are a lot of rivers apparently, and Hot Pie is obviously not used to maps which is merged into the narrative flawlessly. Arya decides to cross the river, and the others can only follow. She is stubborn. Later they come upon another river which isn't as deep, and by dusk they stop to eat and rest. Hot Pie begins complaining again. He suggest building a fire since he's cold and wet, but Arya and Gendry shout him down. Arya stops to consider Gendry for a moment, how he is becoming like a big brother to her: "He said it with me, like Jon used to do, back in Winterfell." That's sweet. They don't even take the time to sleep, instead riding on after the meal, exhausted but fearful of being caught (no wonder). Arya falls asleep on the horse, and is woken up by Gendry. Arya refuses to admit she fell asleep with the funny line, "I was just resting my eyes," a classic excuse the Slynt has been known to use from time to time as well. Hot Pie rode into a tree limb and got knocked off, which is funny too. Turns out Gendry is the most enduring of the three.

In her dreams, Arya confronts the Mummers coming after her, but in the dream, Arya is hunting them. She is a huge and powerful wolf in the dream, and she - as Nymeria I assume - takes the fight to them. The fight is almost not described, probably to give the illusion of its quickness, and the chapter ends with Arya/Nymeria exulting as she shakes a ripped-off limb back and forth in her mouth. That's pretty awesome. So now we know that Arya too can warg. I admit I had actually forgotten this detail (or rather, not thought about it) but there it is, Arya can warg too, but she has no one to teach her the subtleties of it. Not that Arya is subtle, anyway. But to me, and I may have mentioned this before, it feels as if the whole warg-plot is kind of lost in the many plots emerging as the series continues; or will it remain an important plot point in Arya's arc (I just realized she does warg at least once more, in Braavos in A Feast for Crows). Or am I taking the warging as being more important than it is, and it's really just an added gimmick to the canvas? Maybe The Winds of Winter will bring more answers. More questions, likely. Anyway. Peac eout.