[Re-read] Davos III: Down in the Dungeon

PART ONE OF TWO

So, I've kind of settled back into routine over the last day, and have, since the previous post, realized that what Martin is giving us in the upcoming anthology Dangerous Women isn't a story at all - but rather cliff notes related to a dynastic war pre-A Game of Thrones. Certainly an appetizer for the Targaryen loyalists among us, but frankly I'm not really feeling it (but then I'm a Lannister loyalist kind of). It feels like Martin is focusing in the wrong direction. I refuse to believe that many fans of the series are particularly interested in the history of House Targaryen as opposed to, say, the characters and events surrounding House Stark, House Lannister and/or House Baratheon, the three houses that always were the most integral to the most interesting parts of the plot.
The publishing of these particular notes - The Princess and the Queen - also reinforces that lingering suspicion that Martin has lost interest in A Song of Ice and Fire except the Targaryens and their back story (maybe he's become fascinated or enthralled by "building" their history, much like J.R.R. Tolkien was enchanted by the creation of the Silmarillion legends); and it doesn't really help that in the last years we've seen Mr. Martin being excluded from another anthology (and that's the one I guess the fourth Dunk & Egg story was supposed to appear), had to have others step in to finish editing work for him, that his contribution (lack thereof) to The World of Ice and Fire has postponed that particular volume for years (all the while he's busy making up small nuggets of, you guessed it, Targaryen backstory)... I don't find it particularly strange that people grow more and more suspicious of the author's motives. I find it strange that it's taking so long for people to catch up, perhaps. But now, even HBO executives are asking Mr. Martin to write faster. One can only shrug and think of the past thirteen years spent waiting with varying degrees of excitement for more ice and fire... 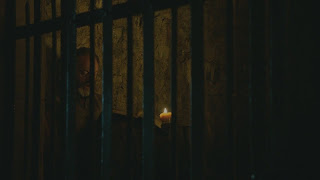 ...or one can sit, isolated, in a warm and dark cell, like Davos Seaworth does at the beginning of this third chapter of his. His situation is reminiscent of Lord Eddard Stark's in A Game of Thrones. The now headless lord of the north was also spending time in a dungeon, in a King's Landing. I'm pointing it out because I've mentioned before that the characters of Dave (can I call him that?) and Ned are similar in many ways (stoic, trying to do the right thing, bearded) and here is another similarity. So even if we lost Ned in the first book, we were given Davos so the character type lives on. I still feel that Davos should have been given a characterization more befitting his profession/character class, though - he's an ex-smuggler, but he sounds like a noble goody-two-shoes. No swearing, no cunning or stealth (that I can think of at the moment, at any rate). But now I'm ranting about Dave instead of getting into the chapter.

In the opening paragraphs of the chapter, Martin tells us that the passageways below Dragonstone are "always warm", and - as Davos has heard it said, in the darkness below it gets even warmer. It sounds like they built Dragonstone over the gate to hell, then - but seriously, this passage(way) has me curious: Why does Martin bother with this information if there's not something more to it? We know Winterfell has hot springs giving warmth, but it seems that at Dragonstone, the warmth remains a mystery to the inhabitants. Martin safes by making it "hearsay" though - but Dragonstone is a location in Westeros that comes rather close to ye olde fantasy castle complete with dungeons below (and I mean dungeons as in Dungeons & Dragons) - mayhaps there are traps and fire elementals and loot below? Old tales say that the stones themselves were "stones of hell"; can't be a recent story since the south believes in seven hells (as if one isn't enough), but we also know that legends often twist the truth, so my suggestion for now is that this story is telling us that Dragonstone is built with stone brought over from old Valyria. Dragonstone is the only remaining Targaryen stronghold after the Doom. Guess I have to move on. But Dragonstone is an intriguing location, it feels more fantasy-like than many other castles in Westeros. I hope we'll see more of it in future installments of the series, should they be published.

We're told that Maester Pylos tends to Davos' wounds and one day he feels strong again. We're told about the two gaolers in charge of his imprisonment though I fail to see that they have any impact on the plot, so its just some coloration. Of course, one can argue that they are there so Martin can describe some food they bring to Davos.

With this chapter, Martin faces the same problem he did with Ned back in A Game of Thrones: how to keep it interesting when the POV is sitting in a dark cell without, well, anything. Well it's not really a problem, its more a matter of having enough useful things to tell us while the character is isolated, so much of a chapter like this will be inside a character's head, thinking on past and future - until someone shows up for the character to interact with, obviously. It makes for what feels like rather short amounts of time spent in prison and you never get that feeling of being locked up for a while because Martin has to move on or the character's story will stagnate quickly (herein lies the problem - I'd like to feel the imprisonment, but you can't keep the reader interested that long). So you get descriptions like "Neither sun nor moon shone in the dungeons" which isn't all that surprising and feels like an unnecessary thing to write (it feels like padding, and it is padding to give the illusion of imprisonment at least for a little while).

Suddenly Martin breaks his own narrative style with a present tense authorial intrusion (it feels like it, anyway; forgive me if I'm off): "A man grows lonely in the dark, and hungers for the sound of a human voice." It almost feels as if Martin looks up from the book he's reading, staring me right in the eyes as he reads this line (nasally). Like, you must understand, dear reader, that a man grows lonely in the dark... before continuing in Davos' past tense POV. A small, but jarring moment there.

He continually asks the gaolers questions but doesn't receive answers from them. After a while, Davos realizes they mean to keep him alive ("Oh really?" Maester Pylos said, shaking his head ruefully. "Must be the milk of the poppy slowing your wits.")
And then Melisandre appears, choosing red for the occasion, eyes gleaming, and every reader dulled by the (I admit short) descriptions of imprisonment are shocked back into interest because you just know that when two characters of opposite alignments meet in this series, it's going to be rife with good dialogue and perhaps a shocking revelation or two.

She tells him that the torch burning in the wall sconce is all that stands between him and the darkness, callingmade for a single purpose: To keep the darkness at bay. Davos says he doesn't believe that. At least he holds to his convictions. He knows she wants to hear him say "yes", but he just can't do it (echoes of Ned). Oh, here we get a little more to make us understand Davos' position: He sees the "miracle" (if you'll allow me to use that word) of the shadow assassin's birth as quite the opposite, a foul thing, leading to another great line: "You are the mother of darkness." Awesome. So here we have a mother of darkness, and to the east we have a mother of dragons. Are there more parallels (we know Martin likes them parallels)? Catelyn is the mother of, uhm, dead kids? Cersei is the mother of three? Anyhow, what if we put Melisandre square in the middle? To the far right you have Ice (Jon Snow, Bran Stark), in the middle we have Melisandre, and to the far left you have Daenerys. If we assume Melisandre is more of a shadow thing, I mean - the confusing thing is that Melisandre kind of enters the story after it is firmly established that we have the two opposing forces of ice and fire, but Melisandre represents the factions of darkness and light. Should we assume that ice = darkness (which suits the Others and the wights just fine) and light = fire (which suits the Targaryens)? If so...and now I'm scratching my head (again). And where do we place the Seven in all of this (especially the Stranger)? For all the detail and complexity that works like a well-oiled engine in this series, Martin is kind of losing me when it comes to the religions and the gods. So I'll just shut up about that now since there are far cleverer readers than me around the web coming up with interesting, convoluted, eyebrow-raising theories. 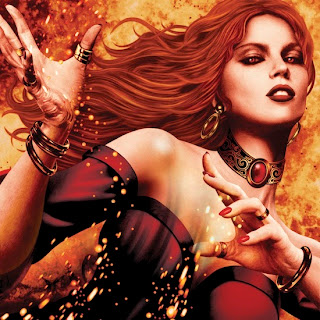 the fire a gift of R'hllor. The interesting thing is that Davos has already seen Melisandre's powers and should be, if not already converted, at least a little bit in doubt as to R'hllor's existence. Of course, she can be a witch who uses her magics in the red god's name, but still... we're talking medieval society, a low-born smuggler and a very convincing priestess here. When he begs her not to douse the torch, she is satisfied and says he has "come to love the fire" which is a nifty little line o' dialogue, but he tells himself he is not going to beg her. Melisandre tells him she is an instrument of R'hllor - like fire -

Part Two coming up whenever I find more time. Right now, Baby Slynt is crying and I mean that in the shrieking, ear-piercing way and Lady Slynt is not in the house so yeah there you go now you know why this chapter has been split into two posts very interesting is it not? Next: The way the world is made!
Posted by R.J. at 8:10 AM