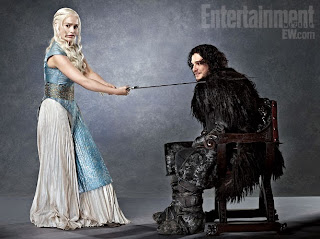 I began this post by complaining about just how little time I have for hobbies such as blogging these days, but then I decided to scrap it because you know - the world doesn't need more bitching and complaining. Especially not from people who really shouldn't complain. The world does need more awareness concerning environmental issues, though, that's for sure. When will the scales finally tip? How long can the west sustain its self-destructive overconsumption? These are questions I often ponder. And I find myself so small, so unable to help save the world, unlike the heroes in my favorite kind of literature, you guessed it, fantasy. Although, strangely perhaps, my favorite fantasy books all seem to have in common that there's no world-saving hero in it. Not yet, I hear George RR Martin say, chuckling to himself. Obviously Ice and Fire will give us world-saving heroics (probably through Jon Snow, Tyrion Lannister and / or Daenerys Targaryen), but we're not there yet. So far, heroics in Ice and Fire are shown on a smaller scale: Tyrion's guts to stand up to, well, everyone else and save King's Landing from the wrath of Stannis Baratheon; Jaime rescuing Brienne from the bear; and I am sure there are even more heroics displayed in the series. Daenerys is the one whose role is most "messiah-like" perhaps in the way she goes about liberating slaves and trying to institute a more modern view of slavery in Essos; it could be argued that this may foreshadow her liberating the world from the Others. Enough digression, there's a chapter to digress digest. And what do you know, it's a chapter from the point of view of Martin's most hero-like character (in terms of archetype): Jon Snow. If only he was as cool as his name (pun not intended actually).

The chapter opens darkly, and I mean that in the literal sense as the night is black and moonless. Jon Snow tells the Thenns he's going to look for Ghost, and they let him pass. Trudging up the slopes through "pines and fir and ash" he looks at the stars and is caught in a moment of wonderment. This, of course, allows Martin to slip in some world-building, in this case about the stars that Jon knows. It's probably unnecessary information, but I do like it when Martin builds up his setting with short snippets like this (no, not overlong "snippets" as found in the latter books). We learn that the sky is divided into "twelve houses of heaven" with rulers for each (I wonder who they are?), there are "seven wanderers" sacred to the Faith (which is telling me there are seven other planets orbiting the same sun, though one or more of them could be asteroids); there are stars with names like Ice Dragon (a reference to Martin's children's novel The Ice Dragon I suppose), the Shadowcat, the Moonmaid, and the Sword of the Morning (hey, is this a hint that Arthur Dayne's sword was made of material from the skies?); however, Jon reflects how Ygritte has entirely different names for the same stars. This in turn leads him to change tracks (in his train of thoughts), beginning to think of Ygritte; when he reflects on her stubbornness, he once again distracts himself, now thinking of his little sister Arya who was also stubborn.

He finds Ghost atop a hill; something draws the beast to the heights, as if he's looking for something (or waiting for someone?) - it's a curious little detail this, that I haven't really registered before. I have to look out for any resolution to this particular question: What is drawing Ghost to the heights? Jon tells the wolf that tomorrow is the day they have to part; I can imagine this scene as a tearjerker in the TV series if only they give Ghost some more screentime so that the audience will care (they did care about Lady though so maybe...) He tells Ghost to go to Castle Black and wait for him there. The text does not make clear whether Jon believes the direwolf actually understands him in any way. Then, suddenly, Ghost's ears prick up and he bounds off - Jon wondering if the wolf's caught scent of a hare, or if he's already following orders and going to Castle Black. There's some thinking about warging and how he feels an inadequate warg, but this feels mostly like the author reminding us that Jon has some innate abilities not yet developed, read along dear reader, more to come.

Next is a short paragraph giving us an update on Mance Rayder's movements (they are somewhere between Shadow Tower and Castle Black) and some landscape description to enhance the images in our minds, before we get a paragraph where Jon thinks of the Seven Kingdoms on the other side of the Wall; Jon is struggling with his loyalty at this point, wanting to warn the Night's Watch before he arrives with the wildlings, but finding no good option to do so. He regrets not having killed Mance Rayder when he had the chance, and tells himself he slept with Ygritte to play the part of a turncloak proper - however, his thoughts betray him to us readers - it seems evident that he also slept with Ygritte out of pure lust: "His body had played the part eagerly enough." A breast is mentioned, as par for the course, and there is sopping wetness obviously, but Martin doesn't go overboard the way he may do in other (not all) sexual scenes. Martin perfectly displays Jon's inner turmoil, though. Like a colleague said the other day, "sex complicates everything, every time".  I don't remember why this was said, but I assure you I had nothing to do with it. Slynt is a chaste man (unless it involves Lady Slynt, of course; then Slynt becomes promiscuous as it were).

Funny how Jon vows to himself that it will never happen again. Yeah right. Oh, we don't even have to wait for that idealistic goal to fail: "It happened twice more that night, and again in the morning." Like a true hero, then, Jon is an enduring fellow. Aaand there's more ruminations. What have I done? Oh, gods old and new, what have I done?

So Jon is basically standing on the hill thinking for himself when a guard arrives telling him to come along; the more lore, this time about Gorne, a former King-beyond-the-Wall, and we're treated to some lore about hundreds of interconnected caves beneath the hills and mountains of the north, reminding me somewhat of the Underdark (in the Forgotten Realms - by description only, of course, I don't suspect the caves beneath Jon's boots to be full of dark elves and spider goddesses); Martin spends a good deal of words on this legend - leading me to suspect that we might see Gorne's Way, a tunnel deep beneath the wall, now lost; but since Martin gives it all an air of myth, he doesn't have to (re)introduce it Chekov's Gun - style. Still...Ygritte's tale of Gorne and Gendel...could it be we'll see some characters traverse the depths of the world, Moria-style? We can only wait and see. 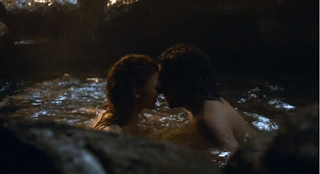 Magnar of Thenn wishes to see him. It is good to get some exterior action after dwelling long in a character's thoughts. Inside a huge cave, fantasy-style, they have camped, well hidden from Night's Watch scouts. There's some explanation / exposition on who's who in the cave which I find rather clumsily written to be honest; he belongs to the lady who is the sister of that one which makes him kind of a brother-in-law somehow (slightly paraphrased). The Magnar is a bit more direct, asking Jon to tell him about Night's Watch patrols. Jon notes that there is some internal strife among the wildlings (all attentive readers take note). Jon reveals the necessary patrol information (without a conflicting thought, it seems, perhaps made obvious because he's so thoughtful earlier in the chapter), we're given a short bit of lore on Arson Iceaxe (great first name) and as a reader we get to learn just how things are done at Castle Black - a tactical overview, if you will. Ah, Jon does try to lie by adding a few hundred men to the defense, but Jarl sees through him, unfortunately. Exposition on the Thenns follow, before Jon goes off to find Ygritte. Mmmm I wonder what that could, possibly, lead to. Even

Aaaand breasts are bouncing and Jon is pulled out of mythology and straight into sex. Obviously. Also, forgetting all vows and honors at the sight of her nakedness, Jon begins to shower her in rosy words, showing us that not only is he one horny son of some Stark, he also loves her. And, in case you thought it happened only in the TV show, Jon does go down for a furburger, what do you know. Afterward Ygritte realizes that Jon was a virgin before her, learns that oral pleasure is something she can live with, and through it all we have restless undercurrent, Jon's conflicting feelings and thoughts about his loyalty to the Night's Watch and his loyalty to, not the wildlings, but Ygritte.

Perhaps unintentionally funny, Jon is worried that Ygritte has slept with a guy named Longspear. Our Jon is a little insecure. Aaaand they have sex again. Ah, youth, brimming with energy. The chapter ends here in the darkness of the cave, with Ygritte saying she doesn't ever want to leave (as in, "I love you too and would like to stay here with you instead of doing anything else"). Oh yes, Slynt remembers his own youth and how completely enraptured he could become, not wishing to let go, so enthralled. What I am trying to say is that I buy Jon and Ygritte's arc here. It's how young people can behave. But it also, of course, sets up the tragedy to come. First, Martin paints their love as a bliss, a rush, a strong desire, the rest of the world be damned, youthful and powerful; it will sharply contrast a future chapter (he said, of a book released in 2000) in which, as I guess we all know by now, their love ends. Rather abruptly.

Yeah what can I say? Not a terribly interesting chapter on the tenth read, but a more thoughtful chapter (literally speaking), and a development of Jon and Ygritte's relationship. And without that stuff, obviously, these books wouldn't feel as good and grounded as they do.

A bit more over the top, perhaps, is Daenerys Targaryen and her story, to which we return in the next re-read post. Until then, may you be kissed by fire. Uhm...
Posted by R.J. at 6:24 AM