After a month or so of little geek time (except reading 'Prince of Thorns', where a major reveal last night did not come as a surprise, but still had me thinking about it afterward) I have spent a couple of hours in a subterranean randomized geek world. Using DOSBox, I have revived a youth passion - I have played SSI's classic dungeon crawl DUNGEON HACK, a simple AD&D game where you take one character through a randomized dungeon. The game most closely resembles one of my favorites ever, 'Eye of the Beholder' (it features some borrowed graphics and utilizes a very similar interface) but there is no plot. Instead, the fun lies in trying to guide a character through hard mode, where if you die you are dead and your saves are deleted by digital sorcery. 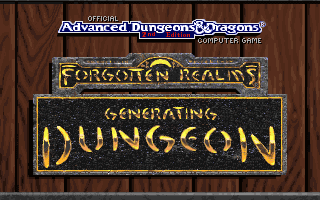 So, four adventurers have lost their lives in the dungeon so far today, two of them ending on the game's Hall of Fame list. It's like a competition against yourself, or a solo module of yore. Boy do I wish someone could remake all these classic games based on AD&D or make modern sequels with the same kind of addictive and fun gameplay. As it stands, ancient DUNGEON HACK is much more fun than recent franchise games like Neverwinter, Daggerdale or D&D Online. The only game to come close is Legend of Grimrock, so I am anxious about its upcoming sequel.
Posted by R.J. at 9:34 AM