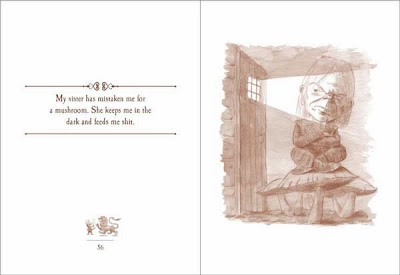 This post contains a heavy spoiler from the end of 'A Storm of Swords'. You have been warned. Sincerely, Bowen Marsh.

All right, where was I? I was pretty confused reading this chapter two days ago, but in my defense I was very tired and not really focused. But that's how it is, sometimes, isn't it? The chapter never seemed to end, nor did it have scenes that really grabbed me by the, uh, attention. Let's see if, upon finishing the chapter, we get some juicy stuff to rattle our sensibilities. Speaking of sensibilities, it seems I am not the only one who finds The Wit & Wisdom of Tyrion Lannister a somewhat useless product for which actual trees have paid with their lives. On Amazon.com's page, the book's current rating is a cool two stars, with 28 reviews giving it one star and 4 reviews awarding it with five stars. Not out of spite or anything, but I do hope that this brings home the signal that people will buy Ice & Fire stuff, but that we're also reasonable human beings who won't buy everything with Martin's name on it. If not, we may have to face further titles such as The Back-and-Forth Considerations on Ruling of Daenerys Targaryen, Fabulations on my Sister by Jaime Lannister, The Various Conquests of Gatehouse Amy, Etiquette & Protocol as Defined and Refined by Shitmouth, Where Honor Gets You: A Guide by Lord Eddard Stark, Things Bastards Say: A Collection of Quotes from Luminaries in the Realm of Bastarddom, Quotes that Suggest Varys Feels Less Manly, and of course The Complete Collection of Hodor Quotes.
So here I am complaining about a book about A Song of Ice and Fire while I'm writing books about A Song of Ice and Fire myself. There's a difference, though, isn't there? I've spent years writing about these books, while I could have copied/pasted quotes from the books in half an afternoon. Same goes for many other fans who are writing about Martin's works and worlds, engaged in activities which show our affection for the series. There's a lot of these kind of books available these days, and all of them are more worthy of your attention as an Ice & Fire-devotee than a book of quotes you already know full well. The worst part of it is that when taken out of context, the quotes aren't even that great and some of them are definitely not the kind of lines of dialogue you want to have lying around on your coffee table. And now I shall stop ranting about this publication for ever and ever!

SO, Tyrion was having a chat with his delightful father, Lord Tywin Lannister, who has just told his son that it is useful to show off your wealth because he equates this with showing off the power of his family - but he is not going to forgive the throne's debt to his house to make it easy: Tyrion just has to conjure up the money needed for the expenses of the royal marriage. And again, thanks dad. You are the best. How can you not be the best dad ever when you casually throw in a request to get it on with Lady Sansa Stark, a young girl who has been living in hell since forever, possibly on the brink of suicide who has but recently become a woman (in practical terms, that is).

Tywin is, perhaps interestingly, "puzzled" by the fact that Tyrion has no problem 'bedding whores' but doesn't want to force himself upon Sansa. Interesting because this icy man is always shown as being above petty lust, yet here he is puzzled - in other words, he does show a certain understanding of lust. I mean, here we have a tiny hint that he thinks more like Tyrion than he would ever admit. We'll see where that gets him toward the end of the novel. Tyrion tells him Sansa is too young, but Tywin doesn't want to hear it - because, once her brother is dead, which Tywin says with an absolute certainty (and thus it could be seen as foreshadowing in a way) she will be the Lady of Winterfell. He tempts Tyrion here - "claim her maidenhood and you will be one step closer to claiming the north" - note that he says 'one step closer', thus not promising his son that he will actually become the Lord of Winterfell, I love that insinuation from the author that Tywin isn't really thinking of Tyrion as a future lord. Another possible foreshadowing, or at least a clue that may lead to a separation - the High Septon or a Council of Faith have the authority to annul a marriage if the wedded haven't had sexy-time all night long. Will we see this happen? Maybe. At least the author has put it in there for us to read, so that we can believe it when, in the future, we'll see an annulment of a marriage.

Next up Tywin tells Tyrion that Mace Tyrell has refused Tywin's offer to marry Cersei to Willas. Cersei, however, does not know - and Tywin reminds his son that he is not going to tell her. Again, the TV series departs drastically here, where Cersei knows she is to be married to a Tyrell. In the book, she is never to know about the offer, as Tywin states clearly that for all practical purposes, there never was made an offer in the first place. 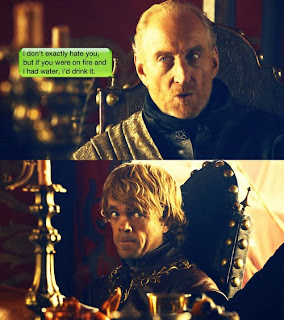 That is kind of funny, and juicy, and another game-changer that kind of flies under the radar. This lightens Tyrion's mood, though. He likes that his sister, who thinks so highly of herself (at least the way Tyrion sees and knows her) has been refused. Tywin suspects Lady Olenna - the Queen of Thorns that is - for interfering and forcing her son Mace to refuse. Tyrion has to laugh, and I kind of feel good for him, that he can still laugh - but usually it is at the expense of someone else, often his sister. It is quite a dysfunctional family, no doubts there.

Pycelle enters the room, giving Tyrion the evil eye (Tyrion had his beard shaved off back in the good old days when he was still the most efficient Hand of the King in the annals of Westeros). He wishes to speak with Lord Tywin privately, but Tywin says Tyrion can stay. This of course makes me curious and interested because if we know our Mr. Martin, Tyrion will learn something possibly shocking or revealing or something that twists the plot or his fortunes. Excited, I flip the page (actually I just click a button as I'm reading this chapter in a Kindly way) -- but it's "just" news from the Wall. One would wonder why it's so important to Pycelle that Tyrion doesn't hear this - did he plan to tell Tywin something else and when Tyrion doesn't leave he just improvises on some useless news from the frigid upper north? Even Tywin tells Pycelle that "this warning isn't new" (the warning being that wildlings are moving in great numbers beyond the Wall) - however, there is news of Lord Jeor Mormont's death, which is news. Tyrion, having met the man in person, had liked the gruff Lord Commander but he does not express any outright grief. Pycelle proffers Tywin a letter addressed to all "five kings" (you just know Tywin has to take that as a slight) which states that the Wall is expecting an all-out assault from the wildlings. Of course, this takes (once more) the focus off the reality of the threat as Tywin gets annoyed and begins complaining that there is only one king and that's Joffrey Baratheon. This makes Tywin less interested in dealing with the Night's Watch simply because the Watch isn't acknowledging that there is only true king of Westeros.

Tywin suggests that the Night's Watch needs a better Lord Commander who can bring some discipline to Castle Black - and I would so so so love it if the story had taken Tywin to the Wall instead of the privy! Imagine Lord Tywin Lannister forced to take the black! That would be hilarious and interesting all at the same time and could provide for some very interesting story developments. Of all the characters Martin removes from the game of thrones, I feel Tywin is the one that weakens, rather than enhances, the stories to follow; Ned Stark's death set into motion a fantastic and dramatic story - Tywin's demise just kind of leaves a hole. /sad Slynt.

Oooh! /happy Slynt! Slynt is proposed as the next Lord Commander of the Night's Watch. An all together fitting role for one of the most misunderstood and loyal men under the lion banner. Pycelle seems to suggest Janos Slynt mostly to wex Tyrion, though. And Tywin can just enforce this decision because if the Night's Watch doesn't accept Slynt, well, then Tywin doesn't send them more men. Simple as that. Might makes right. Tyrion tries to tell his dad Slynt is the wrong man; but Tywin won't have it. "There is a tool for every task, and a task for every tool." Couldn't have said it better myself. With that, Tywin orders Pycelle to send a letter to the Watch: they cannot spare any men for the Wall right now, but behave and install Slynt as Lord Commander, and we'll see. What a man, Tywin Lannister. Cunning and cold, enigmatic and ruthless. Truly a loss for the story, if not for the realm.

Tyrion regrets not having killed Pycelle and Slynt, but thinks to himself that at least now he has learned (by ordering the murder of Symon Silver Tongue), and thus ends the chapter with a last reflection: See how fast I learn my lessons? It's not a WOOWIIIEEEWEEBAABANG cliffhanger ending but it is quite chilling in its foreshadowing. Martin is almost spelling it out for us. You know what I mean. Their later confrontation featuring crossbows, poop and whores.Among other things.

And that wraps up Tyrion IV, not the most brilliantly written Tyrion chapter but still a decent read with some interesting politicking and a few funny lines of dialogue. I am not sure I understand Pycelle's motivation toward the end here, is it just to wex Tyrion that he suggests Slynt for Lord Commander or is there more to his agenda here?