George R.R. Martin's "The Princess and the Queen, or, the Blacks and the Greens"

It is snowing like crazy-snow here right now, and has been doing so for days (and is expected to continue for a few days, with a blizzard thrown in for good measure later today). Outside it's as if you've stepped right into the lands beyond the Wall and then some. It's not unusual in these parts of course, but the massive amounts whirling down these days is stunning. I am literally up to my knees in snow when I go outside to brush the snow off the car before going to work. Annoying, yes, cold, definitely, but also very beautiful - an almost magical, dare I say fantasy, feeling to it. The way the branches of trees bend under the weight of fresh snow...I like it. From inside, that is. And everybody who knows me just a tiny bit has to tell me that "winter has come" wink wink nudge nudge. "Not yet," I reply in an ominous tone...


Anyway, the debate seems to continue over at Tower of the Hand where I had a little discussion with Stefan Sasse (as mentioned in my previous post) - hundred and seventy comments and everybody's civil, not bad. I didn't actually expect anyone to kind of agree with me, but hey, there they are. The funny thing though is that I feel like I am kind of coming around a bit, what with Stefan's suggestions to read Adam Feldman's The Meereenese Blot to get a more positive view of A Dance with Dragons. I'm sticking to my points mostly, but maybe...maybe I can find some love for it after all. What our discussion eventually ended up with was that it's a matter of taste, though, and thinking about it, I suppose that at least some of my gripes with A Dance with Dragons does indeed come down to taste. Many of the revelations in ADWD were things that I personally just didn't enjoy that much; I would have preferred, as an example, for a certain people to remain extinct and not live beneath a hill and look the way they do. All this is a matter of taste, right? I fell in love with the series mainly because of the intrigues at King's Landing and the great characters present there, and the warfare and the grittiness. Now, five books in, the story has gone in a direction I don't like as much as others, and this has nothing to do with the book's technical qualities. I remain convinced, however, that as a piece of literature, the last two books aren't as well executed. 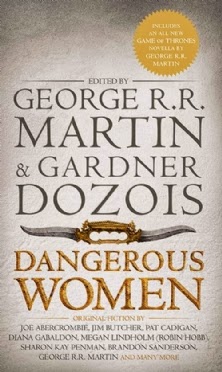 Enough. I have finished Martin's contribution to the Dangerous Women anthology, and here are some of my thoughts presented haphazardly. I spent a few days reading it in chunks due to real life competing with my reading time, not because I was bored with it or anything - so that's a good thing.
I've got to admit I wasn't very positive toward it (I read all the other stories but one first - I'd never be able to do that ten years ago); I am not that interested in Targaryen history and lineages and all that; I have lost my respect for the author; and I'm kind of more interested in progress on The Winds of Winter.
All that being said, I admit I was pleasantly surprised!
The full title of the piece was, by the way, also something that made me wary. I mean, come on.
The Princess and the Queen, or, the Blacks and the Greens. Being a History of the Causes, Origins, Battles, and Betrayals of that Most Tragic Bloodletting Known as the Dance of the Dragons, as set down by Archmaester Gyldayn of the Citadel of Oldtown (here transcribed by GEORGE R.R. MARTIN).
He really likes his name best in capital letters, our George.
Now I am feeling that the title is supposed to be at least a little tongue-in-cheek, and that I am being way too serious about this stuff, not wanting the "here transcribed..." part to ruin my illusion of the "reality" of Westeros, if you know what I mean. It's like when I hear George Lucas talking about Star Wars as if it isn't real. So, I decided not get hung up on the overly long title, even though it does not appeal to my nerd-senses at all. The title breaks the illusion, simple as that. For me, that is. But I'm not going to be all nerdy about it. Still, one could half expect to find a character named Ser George R.R. Martin in the next novel. This whole "shattering the illusion"- thingy which obsessives like me don't like much was also a minor detail which made me dislike A Dance with Dragons where real-life bloggers were given "roles" in the novel. It breaks down that wall, you know. I have to live with that, of course. But still. Trying not be too bothered about it.

So, the good news is that I found this a rather interesting and engaging story for the most part. I did not expect the prose to be like it is. I thought it would be more dry (though chunks of this material reads like a history description in a roleplaying game sourcebook). I didn't expect neat political intrigues in King's Landing, which is what I'm so fond of. But there it was. Martin also manages to write a history lesson with a nice pace, there's always something coming up of interest, and though the characters aren't painted nearly as vividly as they are in A Song of Ice and Fire, they are interesting enough. And so many of the classic Martin trappings are in place - numerous characters, cool nicknames, bloody and brutal events, betrayals and murder, Lannisters, Starks, Baratheons, Tyrells, Targaryens, some droll humor (not much, but a little), I couldn't help but lose myself for a few moments in the world of Westeros again.

Ack, I should have taken notes as I read (but that would ruin the experience a bit); there were several times where I made a mental note of "this is something I should mention" but the words flew by (as we know, they are wind). I noticed that the novella's editing suffered a bit, much like A Dance with Dragons. If I'm not mistaken, a character even changed name halfway through. Missing punctuation, some clunky sentences and even a sentence that didn't make any sense no matter how I tried to analyze it. Could be me, though. Or the fact I read the e-book.

The novella is in fact more of a history lesson than a story, though; leaning closest, perhaps, to tragedy. I kept thinking while reading that I would have loved to see Martin flesh this stuff out into a serious stand-alone novel complete with Ice and Fire's POV structure, characterization and depth. In some ways, then, the novella feels like a very detailed synopsis for such a story. Especially the early scenes feat. Ser Criston Cole and the council in the Red Keep would have been rather nice reads. Maybe I have to do it myself.
I really loved the political scheming and intrigue and back-and-forths in this story.

While I enjoyed the lesson and the characters, there is one thing I feel as rather odd; how all these epic events happened not that long ago yet we hear almost nothing about it in the main series. Granted, there are some mentions but I am talking specifically about all these dragons flying above the lands and cities and towns of Westeros, burning down this hamlet and that, some crashing into the God's Eye, some fighting each other in the sight of so many people; in my mind, it feels as if the dragons should have been gone much longer for their memory to have become so vague in A Game of Thrones. I don't know. Maybe it's that pesky taste-thing again. It's also kind of weird how all these families and locations feel just like they do in A Game of Thrones, centuries later.

Also; in The Princess and the Queen the House Baratheon is refered to as ancient - isn't that a direct mistake compared to existing canon? Just asking, my brain ain't what it used to be.

Finally, Martin continues to deploy his much beloved medieval words and phrases, a few new ones have entered his vocabulary (which I'm sure we'll see more of in The Winds of Winter) to the point that it becomes a bit annoying, especially "must needs" must needs go, if you ask me. I wish he could keep to the prose and style he established in the first three books, but of course these books are written over a long time so it should be obvious that Martin's writing evolves a lot between novels and novellas.

All in all then, it was an enjoyable read. I kept longing for a proper story though, written like the main books instead. I don't know how many novellas of this type Martin can churn out before people get fed up with it (not saying he's planning on it). For a Targaryen loyalist this must be fantastic stuff, though. For a Lannister loyalist like myself, not so much - the Lannisters aren't really on the top of their game two centuries prior to Lord Tywin.

Some information that certainly will crop up again in future books (like how to handle dragons) is interesting, too.

And now it's WEEKEND BOYS AND GIRLS! Take it easy and don't do anything I would do.
(Which is skiing and drinking beer, if you must know. And finishing Michael Moorcock's Elric: The Sailor on the Seas of Fate. And hopefully find time to write down some ideas I have for a short story. And perhaps another beer. And, if the stars are right and Chthulhu stays asleep, another chapter of A Storm of Swords.)