I'm the kind of person who, once I get sleepy, just have to stop whatever I'm doing and sleep. Especially these days when I'm up several times a night with my Second Son. Didn't dream of controlling dragons either. Instead, my brain opted for a dream in which a giant mall had been built right outside a retirement home, its walls so close to their entrance that they couldn't get in or out. Not seeing the grave injustice at work I went inside the mall looking for books. Oh yes. 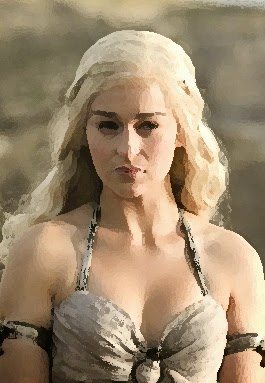 So, last night there was a little confusion for me personally with the Stormcrows and the Second Sons and who belongs where, but I got it all sorted out. Daenerys held three meetings in her pavilion, then surprised her allies by deciding to go for a night attack. But before she could carry out the plan, Daario Naharis was brought before her and gave her the heads of the two other captains of his mercenary company, and telling her that the Stormcrows were now hers. And that's where we pick up the thread tokar again. Oh, and there was some anger directed at Ser Jorah Mormont for his petty jealousy.

Daenerys thinks of how she is the last scion of House Targaryen, and it makes her sad to think that she cannot bear children. She tells her dragons that they are her children. It does seem, though, that the gods don't agree with Mirri Maz Duur's prophecy and have seen fit to make her fertile again (at least that's my interpretation from her last chapter in A Dance with Dragons). Anyway, she tells them that they will outlive her and I wonder if this is a foreshadowing. Could Daenerys die before the end of the story? It's not entirely unlikely, and here we may have one first clue (first clue I noticed at any rate). She briefly studies Drogon's tail, noticing how the dragon is growing fast, and she dreams of riding him once he is strong enough (that's another foreshadowing toward A Dance with Dragons) - so here we have three possible clues to Dany's future in one paragraph, which makes me feel it is even more likely that we might end up seeing Daenerys dead (perhaps as a martyr?). Right now I can't really envision it, because it feels like she's wearing pretty heavy plot armor, but who can really know what Martin has planned?

During the night, she remains in her pavilion, waiting for the battle's outcome to be reported to her. Here Martin foreshadows the development of his own books: The waiting is the hardest part. Ahah ka-ching. Martin deftly avoids having to spend countless pages on describing all the intricacies of said battle since we stay in Daenerys' head, and frankly I don't mind.
She can't sleep and summons Whitebeard, asking him to tell her more of her brother Rhaegar, because, you know, "I cannot sleep when men are dying for me". Uhm. That's kind of...I don't know, insensitive? Oh Whitebeard please tell me a story so I don't have to think about those who die for me right now in the mud and shit and blood and more mud.

What Whitebeard tells her comes as a disappointment to Daenerys and mayhaps to readers as well. According to the old man with his staff, no doubt a wink/nod to Gandalf the Grey, Prince Rhaegar wasn't that good a tourney knight after all. He did it well, but it just wasn't his favorite hobby; and he preferred the harp more than the lance. Yes, playing music is nice and I'm sure he'd love to play an Iron Maiden-tune on said harp. Rhaegar did ride brilliantly at Storm's End though, defeating Lord Steffon Baratheon, Lord Jason Mallister and even the Red Viper of Dorne and Simon Toyne, the chief of the kingswood outlaws (a mystery knight during the tourney). It's kind of strange to think of all the characters who actually met Rhaegar face-to-face and yet he feels like an enigmatic mystery. That's because they don't talk about him, obviously, but I wonder if the Prince has been made into something more than he was...And I love how, when Daenerys asks if Rhaegar won that day, Whitebeard says that no, that honor belonged to another knight of the Kingsguard which was him. Big grin.

However, Whitebeard goes on to tell her of the one tourney Rhaegar did win, the greatest of them all, the tourney at Harrenhal in the year of the false spring (whenever that was). In this tale, we get some more important info about Rhaegar and Lyanna's story, which obviously bears relevance to the end of this story. 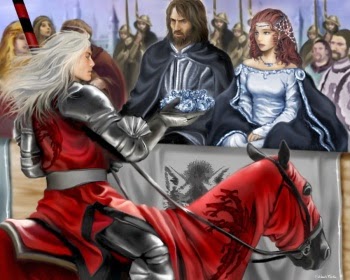 "But that was the tourney when he crowned Lyanna Stark as queen of love and beauty!" Daenerys exclaims, even though his wife Elia was there; Daenerys also says that he stole Lyanna away from her betrothed (Robert Baratheon). "How could he do that?" Dany wonders, and I suppose that's where we have to wonder as well - the action does not really compute with what we know of Rhaegar's character, but when putting together all the hints and backstory bits, I suppose it's hard not to see that Rhaegar and Lyanna loved each other, and that she would become pregnant by him (a laurel in her lap, so to speak), and that he felt it was his duty to bring this child into the world (especially since he believed or knew this child could be a savior of the world); Whitebeard, diplomatically, tells her that it is not for him to say what "might have been in your brother's heart", but it feels like he could have told her more.

Whitebeard gives us more, suggesting that Rhaegar wasn't a happy man. Again, Daenerys is disappointed, but Whitebeard assures her that he didn't mean it as in sour, but as in melancholic...a sense of doom. Now comes the difficult bit to decipher, because we know so little yet. It has to do with a place called Summerhall. The way I read this, Rhaegar was born in grief at Summerhall, for the shadow of grief hung over him all his days, and it was the shadow of Summerhall that haunted him. Yet, Summerhall was his favorite place where he would go from time to time with his harp. Whitebeard seems to think he spent his time there composing songs, which he later performed. The Kingsguard was not with Rhaegar when he was at Summerhall. This, to me, can also suggest that he had some business he didn't want anyone to know - and that business might well be meeting with Jon Connington for some good old-fashioned male-to-male love-making. Just a suggestion. The other suggestion which I suppose has more evidence in the subtext and text is that he spent his time here studying prophecies and reading up on history.
One more thing about Summerhall is that, in the TV series, there is mention of a "battle at Summerhall". So far the series hasn't ventured too much into the story's pre-A Game of Thrones material so when it does, I suppose it's important. And thus I have come to believe that there was a battle at Summerhall and perhaps Rhaegar was born on the battlefield. Another option is that the Tower of Joy and Summerhall are somehow connected. Checking out Summerhall on the Ice & Fire wiki I can see that I can just scrap my ideas right away. Apparently there was a fire that killed several Kingsguard members as well as King Aegon V Targaryen and Rhaegar was born during this fire. Dragonfire? Who knows? Still, the "battle at Summerhall" line was put in the show for a reason. Looks like Martin has said that if we get more Dunk & Egg stories, we might just get that story. Would be nice. Enough about Summerhall already.

Whitebeard is conveniently interrupted when the dragons react to the sound of approaching horses. They are probably thinking 'food', Daenerys is thinking 'news from the battlefield'. Ser Jorah Mormont enters, spattered with blood, goes to one knee like a hero and tells her, "Your Grace, I bring you victory." I love how he tries to win back her friendship and how he takes the honor. He confirms that the Stormcrows turned their cloaks, the slaves broke, and the Second Sons were too drunk. They now have several thousand captives, while they lost...uhm up to twelve people. That's one lop-sided battle! Grazdan has gone to deliver her terms to Yunkai, Mero, the Titan's Bastard, has fled (big red warning flag!). She orders Jorah to offer both mercenary and slave their lives if they pledge themselves to her. 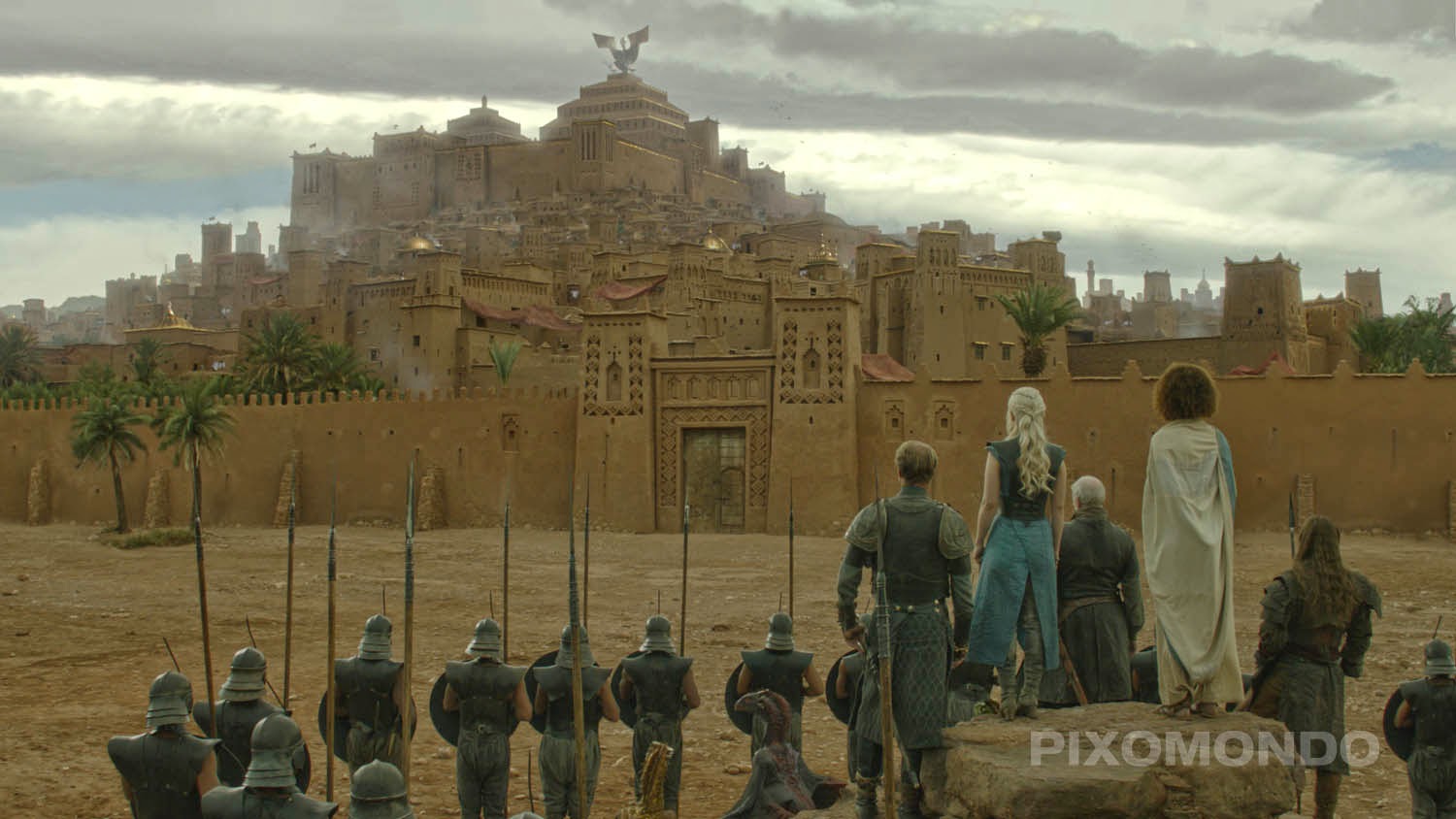 The next day they march the last bit toward Yunkai. It is a yellow city, with crumbling walls and high stepped pyramids and a great harpy above its gates - just like Astapor then, except it is not red. On the third day, the gates open and a line of slaves emerge. She goes to greet them, and the slaves begin to shout "Mhysa!" Hey nice. I thought the mhysa thing was an invention by the writers of Game of Thrones but here it is, all canon and stuff. "It is Ghiscari, the old pure tongue. It means 'Mother'," Missandei explains. That's sweet. And of course it fits so nicely with her not being able to be a physical mother - she can be the mother of these people. I admit I had a little tear in the corner of my eye when I watched the last episode of season three and they began to yell mhysa. Then the cynical part of me thought about how easily this scene can be blamed for being racist (not that I think it is! but people who are more easily offended could say, look how this super-white character becomes the hero and deliverer of these dark people; I'll leave it at that, I am altogether tired of useless racism).

Jorah fears that they will hurt her, but she remembers a dream she had dreamed in the House of the Undying and tells him they won't hurt her (and now I have to flip back and read the House again). Laughing, she rides toward the slaves, and the multitudes keep shouting, "Mother! Mother! Mother!" And there's this one guy in the crowd yelling "It's a little awkward since you're thirteen or whatever, but still! Mother!"

And that's how we round up the chapter - one of the more glorious endings, reminiscent of "King in the North!" I love this kind of adulation. Let her bask in glory for a while, after all, while she is a Dragon, she is also a liberator and slavery is a good thing to get rid of. She is a good character, if a little bit dim once in a while. I've come to like her and her story more and more for each read. The first time I was barely interested, it all felt so detached and different from the good stuff - the politics and warfare of Westeros.

I went back to the House of the Undying (A Clash of Kings, Daenerys IV) and there it is, black and white and no doubt, a rather obvious foreshadowing then. It's not even a foreshadowing really, it's the author stating that "this will happen". If the books weren't absolutely packed with prophecies, foreshadowings, allusions, parallels, and so on and so forth, one could say this is a bit simplistic, but it's quite all right really to have a few of these dreams not be ambiguous.