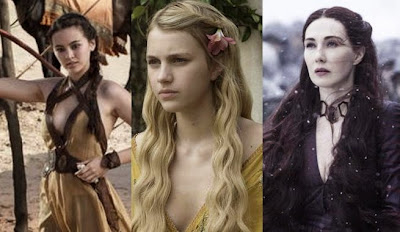 Wow, I mean wow. I didn't expect Sansa's plight to be that big a topic after watching the previous episode, but it was - and still is. You can read different opinions on the matter - including mine (though I admit I just repeat what I've said here) over at Tower of the Hand (part one) and Watchers on the Wall (part two), a lengthy discussion about - mostly - that final scene of last week's episode. And what do you know, I just realized another week and a day has passed. For the first time (probably) I haven't really been excited for a new episode. This is not because of last week, however - it's because I am genuinely less interested in this season. I think the episodes so far have some good stuff, but compared to the previous seasons, even the second (which I didn't really enjoy the first time, but which grew on me on a re-binge watch), Season Five is rather disappointing. But so were the books the season is based on, I hear myself say; but it's not even that. I do think that taking the major developments from Feast and Dance and trim down the excess bloat would make for a good season five, but somehow I feel that they have botched it this time - and I can't properly articulate why I feel this way. There's a feeling that this isn't as well-written, well-acted and well-produced as previous seasons - perhaps especially Jaime & Bronn's Adventures in Dorne, but there's a lot to be desired in other story lines as well. Oh well. I guess it's time to settle down and watch the seventh episode (already!) and see if things start to pick up; we're moving into endgame for the season, and that should provide some drama. I admit a mild curiosity as to where they are going with the Dorne story, as well as fully expecting Loras to die. Maybe not in this episode, but probably in this season. And, of course, I'm wondering if we will see Sansa Stark take control of her destiny or if she's...hey, wait a minute - is George R.R. Martin actually writing a story where Sansa fails to become a player of the game of thrones? Is that why we see Sansa not taking charge and rather bend over for Ramsay's pink mast? I can't really believe that; the books are pretty clear about setting her up to be a player - the thought just occurred to me as I was writing this, is all. Right! Let's check out "The Gift", a title which can mean a number of things - the lands south of the Wall but north of Winterfell (will we see the wildlings move south in this episode?), the Faceless Men's "gift" of mercy, and, uh, perhaps someone receives a gift in the mail. Perhaps that box with that old fellow inside that Varys was preparing for shipment finally arrives somewhere. Maybe we are gifted with a rare appearance from Balon Greyjoy, or Edmure Tully, or Thoros of Myr. Or maybe the episode will focus on someone's talents - gifts. It can in so many directions! But it probably won't.

Right, so wow, I went onto the great interwebs last night after watching episode six, and there sure was a storm blowing - that last scene with Ramsay, Theon, and Sansa sure sparked a controversy, and I can totally understand why. It is a disturbing scene, perhaps extra so because this happens to a character we like, and who has seen nothing but setbacks since the beginning of the story. Remember when she was sitting in front of a mirror and her mother was combing her hair, and she was dreaming of becoming the queen and all that? Sansa is like the embodiment of that age-old expression, "Shit happens". 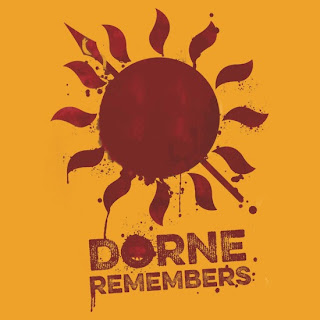 Holy defecation, I know I sound like the needle skipping but come on, how fast do these weeks fly by? I was sure to have done at least two re-read chapters this week and here I am, with another episode of Game of Thrones instead.
Life is meaningful and has way too few hours a day. Oh well.
Things are looking up in terms of finding some writing time in the coming weeks, so there's that. And I really need to tune down the time I've spent gaming the last weeks. I usually play videogames in short bursts, a couple of weeks where I'm hopelessly addicted and then *pop* I lose interest for a long period. I'm still playing Pillars of Eternity, though my gametime is down to less than an hour a week; it's still bloody brilliant, but I kind of lost the story somewhere and want to start fresh, so it's been languishing.

More time has been spent playing actual tabletop RPGs over the Internet, using a nice free utility called Roll20, which I highly recommend to anyone who would like to bring back some of those glory days rolling dice until the hour of the wolf (or whatever) in a slightly different way. Beware, though. It eats time. So, yeah. Not much reading. The Red Knight...I read a little every night, but I've also added a short story anthology to the schedule so I read one short too before the eyelids fall down. But I really need to pick up speed with my A Feast with Dragons re-read, especially with Game of Thrones altering my perception of certain events and characters at a pace never before seen in the world of Westeros (certainly not seen in Santa Fe). Without further ado, a quick look at the sixth episode of the season, "Unbowed, Unbent, Unbroken". I have a feeling this episode will feature House Martell. Or, if they're being ironic, Theon Greyjoy, Heh.
I haven't actually seen the episode yet, as I am going to stream it and try to pop down some thoughts simultaneously so I can clear the rest of the evening for, well, some reading and perhaps if I'm fast enough something geeky to fill that ever-emptying cup of nerdity. Haven't seen or read any reviews or comments either. I am curious...

(Prepare for book and show spoilers and speculation inside!) 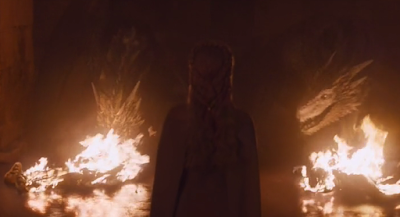 One thing's for sure, Game of Thrones weeks fly by with a blinding speed. Barely having found the time to digest episode four, and episode five has already aired; we're already halfway through the fifth season and it still feels as if it was yesterday that HBO announced the series, and perhaps the day before that the first rumors appeared that Martin's work might possibly become a TV series. To top it off, the show has moved into territory as unknown for us hardcore readers as for the viewers of the show, which makes the experience of watching this season both exciting and mind-boggling. It's a good thing, probably, that Martin hasn't revealed how close the continued story-lines (Sansa's primarily) are to plot developments in The Winds of Winter, but I certainly hope the show diverges as much as it feels divergent. I mean, where's Jeyne Poole? Harry the Heir? Sansa's story is not even similar to her arc in the books anymore. The good thing about that is that the books will remain the books and a must-read even after seeing the show. And now, without further ado, episode five, season five.
I haven't seen or read anything about this episode, so I'm coming in completely unbiased (except that I'm a book fan first, of course).

A Hymn for Spring

From Tower of the Hand:

Tower of the Hand: A Hymn for Spring, our second essay book, is officially on sale now at Amazon for $7.99. The ebook contains eleven original essays about A Song of Ice and Fire, written by Tower of the Hand contributors and our frequent collaborators. Editor Marc Kleinhenz worked very hard, through good times and bad, to assemble this collection of essays, and we're all very proud of the end result. If you enjoy the essays we offer here on Tower of the Hand, we're sure you'll appreciateA Hymn for Spring just as well. We're also sure that you'll want to discuss the essays in detail, so be sure to let us know what you think in the dedicated threads below. Thanks, and enjoy!

This should definitely be worth the money for the Ice & Fire-fan who feels like staying with the setting while its master works on the next book. No, I'm not in it (just to say that I have no motive for posting this other than as a news item).

It does allow me, however, to say that my own book, long-delayed but finished years ago, Waiting for Winter: Re-reading A CLASH OF KINGS (Part II) will be out in the foreseeable future as well, and then its time to turn in the third book collecting my observations on A Storm of Swords.

So what's up in the world of Ice & Fire, because I don't have a clue (maybe George has written another short story on his blog about awards). I'm way too excited about the Vanity Fair photoshoot revealing tantalizing glimpses of Star Wars: The Force Awakens. I'm all giddy. Well, as giddy as you can get when you've reached the venerable age of forty (dammit). In fact, I completely forgot it's a new week, and thus a new episode of Game of Thrones. I've seen it now, though, because I did obviously not completely forget, so here is my opinion on the fourth episode of a season that so far, doesn't tug at my heart strings all too much - and certainly not the way the image of X-Wing fighter pilot Poe Dameron, in a posture reminiscent of glorified WW2 propaganda posters, almost makes me want to shed a tear of joy. But now: Harpies, not starfighter pilots!