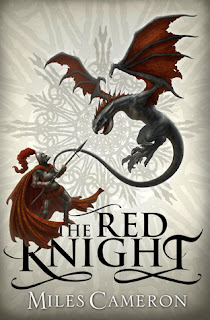 Wow, this holiday is just flying by, and while I haven't had time to continue my re-read of A Feast with Dragons, I did finally - finally - manage to finish up Miles Cameron's The Red Knight. It seems that "Miles Cameron" is but one of several pen names belonging to author Christian Cameron, and that The Red Knight isn't nowhere near being his debut novel - which surprised me when I found out, because by all accounts this novel feels like an author's somewhat stumbling first book, a little gem of a story that could have needed some heavier editorial management. At the same time, The Red Knight in several ways is the novel I've read post-A Song of Ice and Fire that comes closest in capturing some of the magic George R.R. Martin has kept in his bottle all by himself. Following Martin's success there has of course been a whole slew of fantasy slanting toward a grittier style with more subdued magic, but The Red Knight somehow hews closer to Westeros in feel even though it has a veritable (and literal) onslaught of fantastic creatures that perhaps would feel more at home in Steven Erikson's The Malazan Book of the Fallen or even J.R.R. Tolkien's The Lord of the Rings... 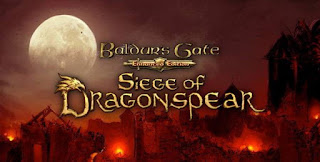 Wow, as if there wasn't enough great news already, Beamdog (makers of the Enhanced Editions of the Baldur's Gate and Icewind Dale classics) have announced Siege of Dragonspear, a tale set between the two Baldur's Gate games.
It's like someone has been scrying my dreams of late and decided to make them come true.
Well, of course, it remains to be seen if Beamdog can deliver the same quality as Bioware did back in the day, but still - that's two Forgotten Realms CRPGs on the horizon.
While I still have to experience an actually worthwhile A Song of Ice and Fire-based game (the fan-made Crusader Kings II mod coming the closest), I certainly don't mind fun high fantasy adventures in the Realms. I fricking love those Infinity Engine games. Yihaw!

Just to make sure I'm not actually dreaming I'll head over to George's blog and see if The Winds of Winter has been announced; if it has, I will know I'm dreaming.

I'm awake.
And the sun is shining and the air is hot, so it's time to go do something with that garden that threatens ever so slightly to turn into unchecked wilderness.

Come winter, there will be so much geekery to be had, I might not even miss The Winds of Winter.

The Week in Geek

Right, I've been away for a while and offline, too. Always exciting to get back online and see what news there is about the geek stuff that excites me - though I have long ago stopped hoping to come back to some real news from Mr. George R.R. Martin. And, of course, there's nothing new to report. I guess I'll just have to sit here twiddling my thumbs in hot anticipation of the collected Hedge Knight stories.

Fortunately, there's been a lot of great new stuff for me personally to come back to that doesn't involve The Winds of Winter. The new footage from Star Wars: The Force Awakens, as shown at San Diego Comic Con, practically had me flip out and shed a tear. After months of not following news on that film (I keep telling myself it's just a film and that while it will most likely eclipse the prequel trilogy in every possible way it won't satisfy as a continuation of the classic tale told between 1977 and 1983 - it has to be more than a film to do that) but at any rate my interest is vigorously renewed and refreshed and now I'm wasting time reading Star Wars fora again. Dammit. I just can't imagine how I will go through life in the weeks before the premiere, and how I shall be able to control myself in the face of an onslaught of merchandise that I want to buy, but know I must not buy as I have a family to take care of. The new, enormous TIE Fighter from Hasbro alone is a month's food consumption, dammit.

Other great news was the leak of the opening track from my favorite band My Dying Bride's forthcoming album, Feel the Misery (quite an apt title, though the song itself was remarkably upbeat for the band). At more than nine minutes, I still managed to listen to it four times today (that's an hour, lol) while doing ye regular household chores, and I love it. The band can pretty much do anything and I'll probably come around to it, and often it takes some time for me to fully appreciate their dark art, but this time I was sold instantly, even before the song was finished. That's a good sign for the rest of the album to come, and will most likely be the highlight of the year for me when it comes to music. A distant, but still incredibly exciting, second will be the new double album from genre heroes and old geezers Iron Maiden - exciting because I, for some reason, believe this to be their best album post Seventh Son of a Seventh Son (1988) and exciting because it most likely means a new tour and I do love me some Iron Maiden live. The year has seen a number of great metal albums already, like Paradise Lost's surprisingly heavy The Plague Within (my current track of the year resides on this one, "Beneath Broken Earth", what a crushing piece!) and a number of lesser known bands' productions, but it is My Dying Bride's Feel the Misery that is the number one music event for me this year, and the deluxe edition, regular edition and T-shirt are firmly pre-ordered.

As for fantasy, I've played around with the Dungeons & Dragons fifth edition core books, and had a ton of fun with it. The Dungeon Master's Guide contains so much goodness (regardless of whether you actually like the rules), it's a joy to read. I'm also still furiously reading everything I come across related to the Forgotten Realms - the lore is so rich and detailed and deep it's quite stunning actually. Which in turn inspired me to install Evernote and begin noting down ideas for lore for my own world. Over the last few weeks using Evernote I've worked more on my setting than I've done for a long time. I found the software to be very useful for this sort of super-geeky thing. The best part being that I could jot down stuff on my phone whenever I felt like it, and then let it sync to the PC later for easy copying into my actual Scrivener project. What I'm building, in essence, is a world book similar in style perhaps to The World of Ice and Fire, though I believe I've already surpassed it in number of words (unedited, I have to add). One of these days I need to stop adding stuff and either publish it somehow, or write stories based on the material. At any rate, it's getting a bit unwieldy at 450 000 words.

Unfortunately there's little to no time these days to write short stories and flash fiction. It's been many moons since I last entered in one of SFFWorld's competitions, and this annoys me. I've been obsessing so much over tabletop role-playing and Pillars of Eternity...sigh.

I'm still reading The Red Knight (Miles Cameron); I'm about halfway through another Realms novel, Curse of the Azure Bonds; I'm reading a hundred different Realms sourcebooks at once, you know, flipping here and there but not reading anything from cover to cover..and I have three new books on my shelf in that category as well, the three 5th Edition adventures Hoard of the Dragon Queen, The Rise of Tiamat and Princes of the Apocalypse, yeah I can't complain - I have more books to read than time to actually read them. Which is better than the opposite.

Well, with too much on my plate it is time for a vow. I'm going to finish The Red Knight, first and foremost, sooner rather than later, making room for The Liar's Key and that Django Wexler novel I bought long ago. I'm going back into my A Feast with Dragons re-read, and I want to finish Pillars of Eternity to clean up video game time for the up-coming Sword Coast Legends, I want to work more on my setting, I want to do short stories and flash fiction again...so something's gotta go. Wasting time on various Internet fora must go first, I guess ... call it a first-world problem, I just wish (again) that the days had more hours in them.

Right! There's still daylight. I need to go read something. Fill my mind with the wonders of fantasy. And please, George, for all the things I'm passionate about, please give us an update. A proper update. Something that gives us a sense of the progress you have (hopefully) made. The Winds of Winter looms above all.

GRRM's editor has sent him an email!

Much to my surprise, my editor Anne Groell sent me an email while I was over in Europe (Germany, Sweden, Aland) to let me know that the

...people clamor for The Winds of Winter. Just sayin'.

Back from the first of several holiday detours, I find the Internet largely unchanged in terms of A Song of Ice and Fire news.

I've been offline mostly, playing me some Pillars of Eternity and reading fantasy lore whenever time permitted.

Soon off again, I can't see a chance to read any A Feast with Dragons this week, either. I don't want to lose steam (I'd rather build more steam) but that's how it is. Summer and all. And so much goodness on the horizon in terms of geekery. Yummy. I almost feel like an author traveling the world and leaving my work back home, just reveling in geekity.

Wonder how far away we are from The Announcement?
Posted by R.J. at 12:32 PM No comments: