[Re-read] Bran I, or "Return of the Cannibal Slaver"

With 28 books in my currently-reading pile, stories to write and games to play, it's become more and more difficult to muster the energy to read A Feast with Dragons. I ask myself, why am I doing this? Then I remind myself, that the goal of this project is to see if I can find a new appreciation for the fourth and fifth volumes of Martin's saga; could I have overlooked something when I read these books upon release, something elusive that, if I'm able to just see it, will make me go "Wait a minute! This stuff is actually brilliant!" So far, no luck.

Still, I'm in the early chapters, with a lot of reminders of what has happened earlier in the story, a lot of slow building, and I did enjoy a few chapters more than I did the first time around. To read my thoughts on the chapters I've read so far, check out the links available somewhere on this page.

I am still planning to renovate this blog, but it's on the backburner; everything seems to be on the backburner these days, and I blame it on two video games that have eaten a lot of my time over the last months: Star Wars Battlefront, which is indeed not a very good game unless you love pretending to be a Stormtrooper (and of course, I love that), and The Witcher III: Wild Hunt, which is just amazeballs and most definitely a game that dips its toes in George RR Martin's style of fantasy. At times, you'd be forgiven to think you're actually in the Riverlands. Except that it for some reason must needs have dwarves and elves. After a solid opening (the whole introduction to the story is so good I've watched it a few times over) you go about business in a Westeros-like world, and then suddenly you meet a dwarf. Who is a smith. And who has a Scottish dialect. Completely took me out the experience, so I've learned to avoid dwarves. Anyway, if you like grimdark, you'll like The Witcher III, despite the occasional dwarf. Well, more on Geralt of Rivia later. It's time to dive back into the re-read of books four and five - A Feast for Crows and A Dance with Dragons - combined into A Feast with Dragons, using the All Leather Must Be Boiled proposed reading order.

And a Happy New Year! 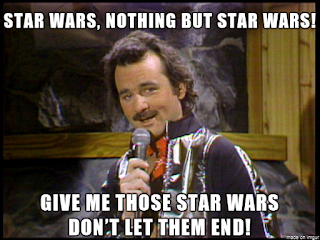 The rumors of my demise were somewhat exaggerated. While December definitely was hard on mind and body, it didn't kill me entirely. When Star Wars: The Force Awakens finally came to the theater, it was a relief. I was extremely hyped right up to the moment the Lucasfilm logo appeared on the big screen, not being able to find interest in anything else but Star Wars. The whole lead-up to the seventh episode caught me hook, line, and sinker, and all my other geek interests were momentarily forgotten. With the movie finally ingested and digested (saw it twice) and facing the fact (which I knew all along of course) that it was just a movie, I calmed down on the whole deal and now I'm able to get back to my other pursuits - which in the last few days has been preparing a tabletop roleplaying session in our ongoing gritty fantasy campaign, now in its twelfth year, writing flash fiction and microfiction and whatnot, drawing maps...

...but really, the last three months or so of 2015 was wholly dedicated to that galaxy far, far away. I've played the heck out of Star Wars Battlefront, having fun along the way; I've read several of the tie-in novels for The Force Awakens, devouring them eagerly; I've made space on a shelf to display some of my old Star Wars toys, in short I was truly a fanboy again for a good while. My son and heir did enjoy Episode VII a lot more than his dad, though, but I'm trying not to say anything bad about it, as this Star Wars is for him and his generation. It was an extremely fast-paced, entertaining and witty Star Wars film, no doubt, and it absolutely crushes the prequel trilogy in almost every department, but whereas George Lucas went too far away from what made Star Wars great, J.J. Abrams stayed too close. The plot was and is wafer-thin, and it was precisely a new, fresh and interesting story I most wanted to succeed with this new trilogy. I can't believe how contrived the plot is, and yes I know you could say the same about the original movie, but there's a difference - The Force Awakens was a continuation of a story that began simple enough but took on epic proportions; I feel that simply reskinning the original film with some additional bells and whistles was a very weak decision, but, seeing the spectacular success, I'm sure it was a good decision marketing-wise. Artistically, though...that being said, the first twenty minutes is a home-run, it was enrapturing, powerful, and most importantly, different yet Star Wars all the way. All the new characters were top notch, and I would not have minded the original trio's complete absence, as Rey, Finn, and Poe have more than enough screen presence on their own. Blah blah ramble ramble.

And then...George R.R. Martin updated his Not A Blog.