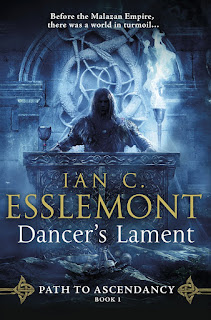 Yeah so I had to stop midway through Quentyn's quest and out of the blue Ian C. Esslemont released a new Malazan novel, Dancer's Lament.
Somehow I didn't know it would be out already. And when I say "already" it's still been the longest period without Malazan goodness since I discovered the series back toward the end of 2009. Since then, main man Erikson published the tenth and final novel of the main saga, The Crippled God, which he followed up with some absolutely fantastic novellas and the first in a prequel series, while Esslemont continued the tales of the Malazan Empire in no less than four novels (Stonewielder, Orb, Sceptre, Throne, Blood and Bone, and Assail), which admittedly are inferior to the Erikson experience, but still solid enough reads if you're into the setting - and here we go again, with Dancer's Lament.

There are really only a few authors who make me stop doing whatever I'm doing to read what goodness they have concocted - Martin, obviously, Erikson, absolutely, Esslemont, by default since I enjoy the setting, and Abercrombie - and so Quentyn has to wait a little longer, but at least he gets to live a little while longer. Whoops, spoiler! Did I mention that in the same period that spawned so much Malazan goodness we only got one novel from Martin (I'm not counting the novella-length history lessons as stories)?  Malazan: The gift that keeps on giving, at least if you can manage to hang in there through the first five hundred thousand or so pages.

Dancer's Lament, then, is so far a great read, probably the best I've seen from Esslemont; the prose is clearer, less dense; there are fewer characters and situations making it almost feel like a YA novel in comparison to such unwieldy beasts as Return of the Crimson Guard. And it helps a lot, of course, that the main characters in this story (which takes place before Erikson's first novel, Gardens of the Moon) are two absolutely delightful and interesting characters who are very much vital to the overall story line. So far, so good; I found Assail a bit of a letdown, Dancer's Lament so far is the opposite. I have no idea whatsoever if this book is readable for someone who doesn't know the setting and characters, so I feel I can't recommend it. I can of course, for the umpteenth time, recommend giving Steven Erikson's work a chance. He is so underrated it goes beyond criminal; this coming from a guy who gave up on Gardens of the Moon twice before persevering. Now I own three copies of it; two of them signed. If you're curious about the series, check out TOR.com's re-read archives and take note of the passionate reader responses and the above-and-beyond interaction with Mr. Erikson. If only more authors were like him.

And now I hear rumblings that Abercrombie is returning to the Circle of the World (i.e., the setting of his First Law trilogy, as well as the amazing stand-alones The Heroes, Best Served Cold and Red Country).

An announcement featuring The Winds of Winter would make the icing on the cake and this fantasy fanboi would be very very happy ever after. Please?