Game of Thrones, S6E9, "The Battle of the Bastards" 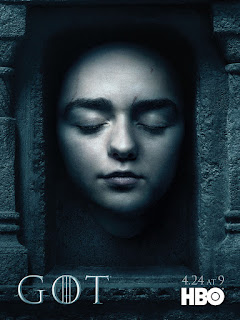 Well, well. This is going to be short, as I am currently fighting against time itself.

I was unspoiled for the episode, except reading speculation and seeing the teaser.

I wasn't particularly excited about the episode (to the point I forgot it was available), mainly because, well, I expected an hour long set piece, probably expertly crafted and full of action and gore, but I'm more keen on getting on with the story and, as similar episodes have proved in the past, spending so much time on a single sequence feels a bit of a waste when there's so much possible depth to add. On the other hand, an hour of solid action breaks up the usual rush of scenes and scattered viewpoints. And maybe the episode would still find time for some iconic dialogue or moments. I ended up being kind of 'meh' about it. There was some great stuff, but there was also stuff that ruined my immersion; a few times I was basically yelling, at other points I cringed. Also, just one episode left of the season and no new book in sight? Have a feeling my Ice & Fire hype will die down quick. Oh well...

Monday morning, and a new episode of Game of Thrones is awaiting. Once again I'm properly hyped up (I'm playing the invisible bass drums with my feet here) and I have no idea what to expect. I love it! Watched the preview a few times, obviously, and have been knee-deep in predictions and hopes and more predictions, but considering I haven't been spoiled at all I suppose there's nothing that will break the Internetweb. Even national newspapers pick up on the most exciting events in the show, so they are kind of hard to avoid (for a man who must needs check the news and drink his coffee to get the day a-rolling). Truly, season six, for all its warts, brought the hype. Will it deliver in the three final episodes, which everybody and his kraken expect to contain some major escalation and tension? And perhaps violence?
Not knowing much about what will transpire, watching a new episode these days is tense. Reading fan speculation (mainly over at r/asoiaf) has made me wonder about a few possibilities - like, is the show secretly bringing a certain stone-hearted lady back? If so, I hope hope hope they make her creepy in the creepiest sense of creepiness. Hideous. But fricking cool. Personally I want her to come back, but I don't quite believe she will be.
I hope this episode explains the scenes with Arya last week, seems like most people agree there was something 'wrong' that must be explained.
Will we see Sandor champion the cause of the Faith? I think the seeds have been sown; he has a reason now, to do so, if only to avenge Ray.
Ray! What kind of name was that? Did they suddenly stop caring about Game of Thrones? Why couldn't they pick any one of the 1000s of names in the saga not used by the show. There's no authenticity in "Ray", imo. Unless it's Raygal. Anyway. Yeah, oh, and of course I'm really excited to see Brienne, Pod, Bronn, Jaime, and the Blackfish. People I know who haven't read the books or just aren't paying much attention have no clue what the whole siege of Riverrun business is about, but for the fans it is hopefully a treat.
The season has also shown that their "original" material is significantly weaker than Feast and Dance's material, which might be another way to find more love for these books. "Ray." Sigh. IT IS TIME TO WATCH EPISODE 8. "NO ONE". With no one in the episode I might have to readjust my expectations though. weeeeeeeeeeeeeeeeeeeeeeeeeeeeeeep! Oh and what about Cersei? I think the teaser has told us enough to foresee the storyline; the Mountain will smash some Sparrows (including Lancel, most likely). After all, she "chooses violence". And I think the Mad King in Bran's vision is nothing but a foreshadowing of Cersei burning down King's Landing (perhaps the target is the temple, but the wildfire spreads). Don't think I'm going to see this happening in today's episode, though; still a way off. Maybe not even this season? I don't know.
All right one final guess, the first scene will be Arya, still in the darkness. At least that's what I'm imagining. First darkness, then we see her face, and we'll understand last week's Arya wasn't Arya.
Here I go. 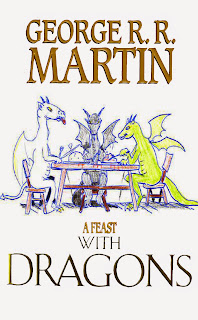 Game of Thrones and A Song of Ice and Fire were never the same thing, and they'll never be, but season six is really tugging at my feels, and has made me excited about Martin's story again (while last year, it didn't); "The Broken Man" is still lingering in my mind, and I find myself speculating a lot about what we're in for with the last three episodes. I find myself checking out speculation online, mostly by reddit, and, seven hells, I even checked Not a Blog. You know. Just in case.
....but with no winds of winter in sight just yet (we must be so close now, right?), speculation remains speculation. "Everybody" expects a showdown in King's Landing between two brothers, both figuratively dead, and I guess I do to, but as long as we're still on this side of Cersei's trial, I've also given thought to - hold on to yer hats - Tommen standing in as the champion of the Faith. It would certainly surprise people, and perhaps even cause an uproar among those who already have their popcorn ready for the so-called 'Cleganebowl'. I could even argue for it, and I did, somewhere, but the books by now are so full of characters, subtext, plot, setting etc. that you could come up with arguments for almost any kind of tinfoil theory. Martin is very, very lucky that Game of Thrones whips up some hype; now that we're partially in "unspoiled" territory (mostly the North; it is kind of surprising how much material, even in the latest episode, is still based on Feast from 2005).....

I tried hard again this week to be unspoiled, but somehow, even avoiding everything related to Game of Thrones, the image of a certain character flashed before my eyes somewhere. This annoyed me, but then I was happy to see him right away; So right away in fact that we get a beautifully shot scene of him and his people building a sept before the titles, titles sequence. Spoilers for everything inside as I throw out my reactions as I watch.

Just noticed I've been blathering on about Jon I in the last couple of posts and it's of course Jon II from ADwD I've been re-reading. /facepalm
Still, when I noticed, I was happified, as it means I've already re-read 14 chapters of the combined Feast with Dragons instead of 9, that means I'll wrap this up in 2024 rather than 2025.

Next up for me is Arya I (*double-checks the Roman numeral*) and, based on the hype generated in my bloodstream by Game of Thrones, and the joy I actually found in Janos Slynt's obtruncation (I'm using a difficult word instead of spoiler tags), I am actually looking forward to read it. Somehow, the TV show has helped me get more used to all the "new" strangeness in books four and five, and it's also fun to read to see the differences between show and books of course.

I know this one thing that would have made my current returning Ice & Fire hype explode, though. But I'm not expecting it in 2016 (I believe I guessed a few years ago, 2017, and that seems feasible to me). But I'm open for surprises! Except the kind of surprises Martin throws at his characters.
Posted by R.J. at 11:40 AM No comments:

So I got cut off from finishing up Jon's first chapter because of this week's Game of Thrones. I'm still underwhelmed, the good thing about that being that I'm not as hyped for next week, despite the return to Riverrun and something actually resembling Jaime's story (it looks like my wish is coming true - for Jaime to stop just hanging around and become proactive; though it's weird he left Cersei on such good terms back in King's Landing if he's going to burn her lett.... oh. They are just skipping that, aren't they?) ANYMOOSE there's a bit of Jon I left to read, and Sam and Gilly have left the building (Castle Black, that is), so it should be all new and interesting for the remainder. Like, I remember reading A Storm of Swords for the first time sixteen years ago and it was just impossible to put down, every page promised something witty, or shocking, or interesting...it was just insanely brimming with awesome. And every time Martin got me, especially with disturbing stuff. Reading Jaime and Brienne was just piling horror upon horror, from the vile Brave Companions, to Jaime losing his hand, to Jaime forced to have said hand dangling around his neck (!), Martin really took "disgusting" to new levels, but he also made me (and many others) consider important themes herein, such as the glorification of war. Anyway, before I ramble into comparisons with the daily news, heeeeeere's Jon(ny).