[Re-read] Davos I: Rock in a Wet Place 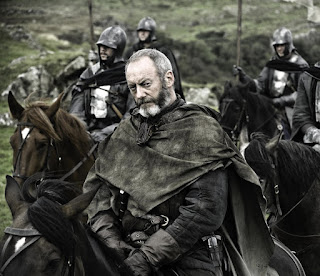 Cracking knuckles and flipping open A Storm of Swords, let's see, after Tyrion I comes...Davos I. Cool. I can't remember whether I believed he was dead or not after Clash, but they sure made him look dead in the TV series, didn't they? Wonder how many viewers believe him to be dead. He's never been a favorite of mine, good old Davos, but neither has he been a character I have disliked. He's just a bit bland, I feel, especially considering him being an ex-smuggler. On the other hand, if Martin had made him all cocky and cool he'd just be a new Jaime Lannister, and nice mellow people there are few enough of in Westeros at any rate. Well, you heard it here first: Davos is alive, if not kicking.

- a bit like this chapter, then. The setting is a lone rock protruding from the waters, inhabited by Davos only, which gives us a somewhat unusual - for the series - piece where all we have to go by is Davos' inner monologue and his perception. Truly a limited third person chapter. It is known. It is also a bit boring.

He's been hanging on this rock for several days (three or four), and there really isn't much to do except trying to pool rainwater to stave off thirst, so you can hardly expect it to be a soul-shattering, series-defining chapter. However, I am sure Loras Tyrell will feel it grossly unfair that him leading the siege of Dragonstone is barely described in the books while Davos gets a whole chapter on a barnacle-encrusted rock for himself. Robb Stark's adventures in the West were also relegated to hearsay and juicy gossip. Am I trying to say that it was a bad decision to include this chapter, instead of having a one-sentence flashback where Davos tells someone he spent three days on a rock? Maybe.

The first paragraphs deal with Davos thinking of death, basically. Dying from thirst, or dying from hunger. Or dying from fever. Or how about death by crab-nipping? What Martin manages to do skillfully here is give us an idea of Davos' hopelessness, his despair at facing the torture that is being trapped on a small rock. In this manner it reminds me of Tyrion waking up after the Battle of Blackwater where we also got to feel the suffering to a certain degree.

We get some cool descriptions of the spear-like rocks jutting up from the bay's cold waters, and Martin goes on to explain about the currents (otherwise we'd be wondering why Davos doesn't just swim over to land). His shelter is a small cave, so it isn't all bad. I know for a fact there are people even in the real world who don't even own a cave. We are again reminded of his thirst, his hunger, and his exposure to the elements. We see a glimpse of darker thoughts from Davos when he tells himself he should die and be done with it ("The gods beneath the waters have been waiting for me (...) It's past time I went to them"). Incidentally, the interesting bit here is that Davos refers to gods beneath the waters, which is - as far as I recall - the only time a character worshipping the Seven thinks or speaks of gods beneath the waters. Who are these gods Davos thinks of? The Drowned God of the Iron Islands? Or is this a slip from the author? Or is Davos just thinking casually of "the gods" like people do these days ("gods know I want a new computer" is something I could utter despite being an atheist).

Anyway, the chapter eventually shifts its dark tone when Davos spots a sail. It is a ship, and it is actually approaching (here I would have chuckled if Davos muttered, "Didn't see that one coming" - you know, because it's obvious since we're starting the chapter on a rock that he'll probably be saved somehow and a nearby ship would be the easiest solution).

Martin lets us stay a while on the torture rack with Davos thinking how he doesn't deserve to be saved, that he should be dead like his sons, that he is nothing more now; in fact, now that I am re-reading it I am honestly surprised how quickly Davos recovers from this ordeal (unless I've forgotten). There's a long paragraph retelling the battle from A Clash of Kings which I'm glazing over, again Davos feels sorry for himself, thinks back to the battle more, this is really stretching the chapter with a good old breastplate stretcher but at the same time it obviously gives readers the opportunity to get back into Davos' story and what happened before this chapter, so I'm not complaining, just taking a mental note. More interesting is it when he thinks back to his smugglers' days, which is more interesting simply because by this point we don't really know much about him, do we? Unfortunately we don't really get anything juicy or interesting because he snaps right back to thinking about dying, his sons, the pyre of the Seven (back on Dragonstone) etc. He goes on thinking about Melisandre, indicating he does spend some time thinking about the red sorceress, and reminding us that he really doesn't like her. Get on with it! Get saved!

He clambers out of his cave and finds the best possible spot (which isn't really good at all - hey, this is Westeros - nothing comes for free, which incidentally is the motto Martin should use for his Not A Blog), Davos begins to shout and scream for help, and eventually sailors lower a smaller boat and go out to get him off the rock. Toward the end of the chapter there comes a quick reflection from Davos - what if these sailors belong to King Joffrey? Then they would probably kill him just like that. Fortunately, these are Lyseni, and they still serve Stannis. So Davos is indeed quite lucky. In his mind, Davos thinks that this is the Mother's mercy (subtly reminding us, in case we're confused, that he still holds to the Seven), which strengthens his resolve and makes him realize that he still has a king to serve, others sons, and his wife; it is, in essence, Davos' loyalty that swims up and shakes him, and all those pages of death-wishing become somewhat obsolete, don't they? Well, on re-reads at any rate. I am sure I was pretty excited reading this the first time, but for a re-read this chapter isn't the most interesting. There's exactly one plotty thing happening, and that is the rescue. No, I think I'm gonna say this chapter could have been condensed to a flashback, but all right, there it is, and it is still better than most chapters in, say, A Dance with Dragons, so there is that.

Another unusual thing about this chapter is that it actually ends on a happy note. How many chapters in A Song of Ice and Fire do that? Kewl.