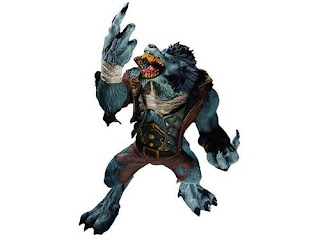 The geek-plan for today is to read another chapter in A Storm of Swords, rewrite the introductory scenes of the SFF World's short story competition for September-October (I realized I was beginning way too early, before anything actually dramatic was happening to set up the story; that's one lesson I've learned from reading all these writing guides, start as close to the 'event' of the story as possible and go from there, then add necessary background) - my problem is that I always envision these things on too large a scale, as if I am preparing for a trilogy of novels and not a short story; but it's worth the effort to go back and redo stuff, because it is valuable as a lesson; third, I hope to find time tonight for a game or something. I received an e-mail from Blizzard Entertainment today giving me seven free days to return to World of Warcraft. Maybe I could add a level or two to my priest (last I saw him he was, I believe, level 77 or thereabouts). I suspect I'll tire of it the moment I log on. Guild Wars 2 has been whispering in my ear lately as well, but so did Diablo III and that game didn't do anything for me at all. Better save the money for all the stuff that's still to come this fall. Anyway. A Storm of Swords.

Martin opens the chapter with a sentence setting the scene, describing nature, immediately giving me that feeling of following wanderers on their way through a secondary world, reminding me of Tolkien's Middle-earth in the way nature was important in his The Lord of the Rings. I've mentioned before how Bran's story-line especially from here on is closer to the classic fantasy of Tolkien than other story-lines in the saga. I mean, if it were thrice the length, this could have just as easily been seen through the eyes of Frodo Baggins: "The ridge slanted sharply from the earth, a long fold of stone and soil shaped like a claw. Trees clung to its lowers lopes, pines and hawthorn and ash, but higher up the ground was bare, the ridgeline stark against the cloudy sky."
Wonder if the use of the word 'stark' is a nice touch or coincidental.
The next paragraph makes it clear just why we are getting this close look at nature - Bran Stark is inside his wolf (that still doesn't sound quite right does it), and as a wolf he's obviously much more attuned to his surroundings, and environmental cues have a greater impact on his senses. So in that sense, it is quite interesting how Martin uses this as a literary technique. It is more believable that we get "closer" to nature through Summer than through, say, Tyrion Lannister who wouldn't stop to admire the different species of tree around him.
Martin rambles on about the nature around Summer, and it's crisp and sharp and enjoyable. "The smells were a song around him, a song that filled the good green world." Here we have Martin using his favorite word again.

As Summer, Bran notices a pack of wolves slipping through the woods near a brook, which reminds him of his own pack: Five they had been, and a sixth who stood aside. Summer, Grey Wind, Shaggydog, Lady, Nymeria...and Ghost. He senses Shaggydog nearby, "angry", and we learn that sometimes Summer can actually sense some of the others, feeling their presence, well, except for Lady who ended up with a smiling neck. Maybe her spirit appreciated the irony when Eddard's head was put on the block. Still, interesting, isn't it, that he can sense them. Could be handy should they all end up in the vicinity of each other again, sometime.

The wind shifts, bringing with it the scent of prey. He sniffs the air, then bounds off to the far side of the ridge, finding a dying deer, encircled by wolves. Martin shows us he knows something about how wolves in a pack function before he lets Summer warn them with a low growl and chase them off, except for their leader. He fights the leader for a long time until it lies down in submission, handing over the deer or whatever is left of it to Summer. As he is about to set his teeth into the deer (I find Summer being quite egoistical here, by the way, just taking someone else's hard-earned kill, but hey, wolves were never known for their manners) the voice of Hodor breaks through the hazy...borders between his wolf-self and his true self. "Hodor, Hodor." He doesn't want to listen, doesn't want to return to his broken body, but he is already realizing that he is now thinking as Bran, not as Summer, and so as his mind is drawn forth and back to his own body, we can conclude that when inside Summer, Bran's perception and self-awareness is weakened and so it is dangerous to stay warged for too long. Bit like wearing the One Ring for too long. Really, Bran + Summer is this story's equivalent to Frodo + One Ring. Don't think I noticed it before, but it is kind of obvious a comparison, isn't it?

Bran returns to his body, which is down in a damp vault of some ancient watchtower, thousands of years old (in Bran's opinion - Martin never gives us these ages specifically, so I am kind of suspecting that Westeros' history maybe isn't as old as some people claim). Jojen Reed tells him he was gone for too long, admonishing him. Bran says he wanted to eat, Jojen tries to comfort him by saying that his sister, Meera, will soon be back with frogs. Yeah, great. Frogs. More admonishment from Little Grandpa when Bran admits he forgot to mark the trees. He's like learning how to pee all over again. Through their dialogue we realize that Bran really enjoys being Summer, because it allows him to run, and because he has actual power (over the other wolves) while in his true life he can't run and doesn't actually wield much power even though he is a prince of Winterfell. Jojen reminds him that he and Summer are two separate identities, so Jojen is clearly worried that Bran will slip forever into his wolf's skin, and by extension, the reader begins to worry too - again, much like we follow Frodo as he must resist the temptations of the Ring. Big difference being of course that Summer most likely won't turn Bran twisted and evil and an agent of Sauron. Bran suggests that he could slip back right away and mark those trees, that's such a nice throwaway line there showing that he's a kid not caring for consequences, but Jojen tells him not to do it. I wonder why Jojen is so adamant about marking the trees, I do not remember this so I am curious if there's an answer forthcoming.

Bran is resentful, wondering how Jojen would know all these things about warging (like, what your wolf eats won't feed your human body); this may be a subtle foreshadowing - that Jojen is in fact a skinchanger or warg himself; maybe if he meets a girl who kisses him, he'll turn into a frog.

Meera returns, much to Hodor's joy, and we are getting small hints that Bran likes her a lot more than her brother. The way he describes her, there's a kind of appreciation there. Fortunately, Meera has brought fish as well as frogs. Hodor collects wood, Meera cleans the catch, they use Meera's helm for a cooking pot and yadayada and when Meera gives him his food, he says, "Thank you, Meera, my lady." Awkward and sweet at the same time - another hint of a growing infatuation?

A discussion follows - should they stay hiding in the watchtower, or move north to the Wall? Will they stay in hiding as they travel, or try and obtain horses? Jojen's arguments win the discussion. "Somewhere to the north, the three-eyed crow awaits us. Bran has need of a teacher wiser than me." Here we see it written plainly - the three-eyed crow is not an illusion, a dream, a phantasm - it's a being waiting for them, who can teach Bran the ways of the Force. Hodor gets restless and Bran tells him to go outside and practice with his sword - allowing the author to remind us they have brought 'tomb swords' from the Winterfell crypts; I'm pretty sure they'll come in handy against the supernatural forces of the far North. But even when outside, Hodor continues to bellow ("Hodor!" - yes, his vocabulary remains limited); is the author trying to get us nervous about something? Does Hodor sense something approaching? At the same time, Bran concludes that the Wolfswood is huge so nobody's hearing Hodor's noise.

We go back to the main theme of the chapter - Bran's relationship to Summer and the danger of his personality being consumed by the wolf - and Bran promises Jojen he will be careful when he wargs. Oh, here we have Jojen admitting he doesn't warg - he's but a dreamer, his green dreams being the only thing he inherited from the legendary greenseers of old - the greatest of them being able to warg into any animal (can't help but see this as foreshadowing for Bran eventually warging into a dragon - you heard it here first. Okay maybe not here and not for the first time.)
Jojen goes on telling Bran why they need to find the Three-eyed crow: Because Jojen can't teach Bran the finer points of warging. It's all a bit vague in the sense that it seems a little random, but at the same time it works well.

Eventually, Meera tells Bran that he should decide upon their course of action, and he's pleased by this. Bran mulls it over, allowing Martin to give us a quick overview of the situation in the North as Bran thinks through his options. The chapter ends when he's made his decision, which fires off the next part of his story arc:

Not the most arresting chapter, this. Three kids and a Hodor hiding out in a barely described tower, discussing what to do next and deciding to go North. At the same time, this chapter of course sets up the story to come for Bran, and as such it works a fine line between exposition and drama. I feel a certain lack of solution to the chapter when it comes to Hodor's bellowing: It feels as if this is supposed to foreshadow an approaching danger, but we don't get an understanding beyond accepting that Hodor is bored and needs to do something. Maybe that's all there is to it, of course, but it feels...unresolved. The earthy feel to the chapter, however, is great - atmospheric, moody, the sense of adventure and fellowship. Gandalf nods his head in approval.

Next re-read: Behold! The Onion Knight lives. Perhaps a layer's been peeled off...but he's alive. Oh we knew that already. But TV-only fans of the series don't. Muhaha. Ha.
Posted by R.J. at 3:00 AM