[Re-read] Sam I: It ain't over until the fat boy swings an obsidian blade +2


I was interrupted while writing yesterday's post and accidentally hit the 'publish'-button. I was about to do something useful anyway, so I let the rest wait - so here's the second part of my re-read of Samwell Tarly's first very own chapter in the saga. The character Small Paul just appeared on the scene, so I'll go from there. Click here to read the first part.

The most prominent song of the novel, 'The Bear and the Maiden Fair', is mentioned even here in the dark and desperate flight of the Night's Watch and it feels forced. Martin really wanted to have that song everywhere. I've never really put much thought in the lyrics but now that I'm thinking about it I think it's quite obvious the alternate title for the song is 'King Robert and Cersei Lannister' or am I totally wrong? The bear, at least, has got to be Robert.

It becomes clear through his dialogue that Small Paul is a simple-minded man, and I love how Martin uses his dialogue to establish this fact instead of giving us exposition in the vein of "Sam knew Small Paul was called that because he had a small brain." Paul would've liked one of the ravens as a pet, but they've all flown off; Martin repeats this fact several times, presumably to make sure we will remember this for later. There's more thinking about what happened on the Fist, and it should be obvious by now that, after all the medieval politics in King's Landing, epic fantasy has landed in Westeros: "(...) he remembered the dead coming over the stones with arrows in their faces and through their throats. Some were all in ringmail and some were almost naked...wildlings, most of them, but a few wore faded blacks." It's more like a zombie flick at this point. I wonder if any of those wights could be Benjen Stark.

Like any good Westeros citizen, Sam pees himself in fear (well a really good character 'soils' himself); turned out that in the midst of "carnage and chaos and blowing snow" Sam found Dolorous Edd, Sam witnessed the undead slaying men in different and gruesome ways, and Sam remembers the Old Bear calling the retreat, there is more urine leakage as Sam sees a big rotting bear (!) ripping Thoren Smallwood's head off. Seriously, the Fist must be the absolutely worst nightmare to experience of all bad things that have happened so far. The smell alone! Sam and others escape by horse, the experience is recounted through Sam's thoughts and again I wish we had this whole attack scene as an actual real-time event chapter thing instead. Oh well, there are plenty of cool events in real-time as well, but with A Storm of Swords, we are starting to see a few things creep into the saga that I personally would be without - a proliferation of new POVs, more events related or told in flashbacks...these two are already showing up, though it not intrusive yet; not ruining the experience, which happened to me with books four and five. There's also a third element creeping in, the element of repetitive phrases, the best example in this chapter being the aforementioned song of the bear and the fair maiden. Anyway, the Night's Watch leave in a so-called 'spearhead formation', Sam among them, and someone yanks him from his saddle (again reminding us there are bad guys on all sides, not just one) to get his horse. I wonder who that Night's Watch member was! Reminds me of these tragedies were people, in their haste to survive some catastrophe, will ensure their survival at the cost of others in the same event. This explains how we find Sam, at the beginning of the chapter, on foot (not that I ever wondered).

We get some more on Small Paul, him being the strongest man in the Watch, and he's carrying Sam, but Paul's strides are shorter now, and there you get that "real-time" tension back into the chapter (I admit I had forgotten there were so many flashbacks in this chapter, and I find them a little bit intrusive when the atmosphere and tension of the 'current' is so atmospheric, so palpable). Beginning to lag behind, others tell Paul to leave Sam to die, but Small Paul remembers that Sam had promised him a bird, and so he carries Sam. Eventually, the two and Grenn realize they are alone. Now that's scary knowing the night is full of the living (and hungry) dead! And poor Paul no longer has the strength to carry Sam. It seems as if death has caught up with them, with icy claws. Knowing their torch will gutter out soon enough, they suddenly know they are not alone after all. What a relief...wait a minute.

"A horse's head emerged from the darkness. Sam felt a moment's relief, until he saw the horse. Hoarfrost covered it like a sheen of frozen sweat, and a nest of stiff black entrails dragged from its open belly. On its back was a rider pale as ice..."

Yes, folks! After so many pages, we are again seeing up-close on of the mysterious Others, who so eloquently slew two rangers in the prologue of A Game of Thrones. This scene kind of echoes it, but stands on its own (the echo being three Night's Watch members); Martin has to sneak in another comment about piss which I find totally unnecessary. Here we are facing one of the feared Others - not a blue-eyed wight, but an Other , "sword-slim and milky white", its armor rippling and shifting ("What?" said someone at HBO; "I thought they were supposed to look like the fierce fighting Uruk-hai!"). Small Paul, unperturbed, unslings his axe and makes ready for battle with a great line: "Why'd you hurt that horse? That was Mawney's horse." Small Paul: He likes animals.

Sam doesn't have a sword, Grenn does an Aragorn and waves with his torch, trying to scare the Other off. Can't wait for this on the television screen! Though it's kind of ... mm..could HBO have changed the Others' appearance to make them less similar to the Ringwraiths? Just a thought that struck my head like lightning on the Vatican roof.

Now most readers are probably firmly entrenched in the chapter during this scene, and it reads fast and furious, and poor Paul gets a crystal sword stabbed through his everything and all the poor guy can say is "Oh", and Samwell is gathering courage as he hears the voices of Alliser Thorne and his father Randyll urging him to stop being a craven, he even hears Jon - but hey - now that we've read A Dance with Dragons he could in fact be hearing Bran (how I hate that everything can now be attributed to Bran Stark of events beyond the Wall). Anyway, Sam stabs the Other with this obsidian dagger and it's a critical hit. In addition, the dagger does bonus damage (apparently) to Others so Sam's lucky in that regard. And we, as readers, get the all-important clue that these obsidian daggers are very useful in a fight with an Other. It's almost too cliché for A Song of Ice and Fire, but there you have it; and the story lines beyond the Wall have always been closer to Tolkien than the other story lines.

So, Grenn and Sam survive, and we're explicitly told that they also call obsidian for dragon glass BIG SIGN RIGHT THERE and Grenn shows some respect for Sam at last, which he better, and, almost unbelievably, the sun is rising in the east and they decide to go follow the pink light of dawn to catch Mormont and the others, and Sam...takes a step - and then another... All in all, a well-crafted chapter, the orange glow of torches in the darkness, the snow and the cold, the suffering, all framed by Sam's step-by-step journey through the dark woods... Lovely. 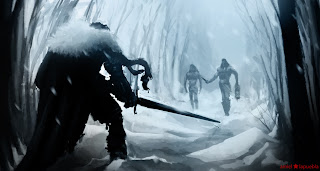 I wonder how it all will play out. Do we need dragon glass if Daenerys shows up with dragons? Will the dragons not show up in the North after all, and it will be the Night's Watch armed with obsidian who will ultimately defeat the Others? There are a thousand questions about the closure of the story, and so far few have been forthcoming. Still, it's better to read about Sam slaying an Other almost by accident in a moment of utter terror - and not knowing what's gonna happen next - than reading about fat pink masts and tedious sea voyages with not much going on. With that snide sniper shot at A Feast for Crows I bid you a good day and may you have a great exploration of one secondary world or the other today (I'm currently learning all there is to know about the fabled island of Evermeet, the Valinor of the Forgotten Realms, or something like that).
Posted by R.J. at 5:24 AM